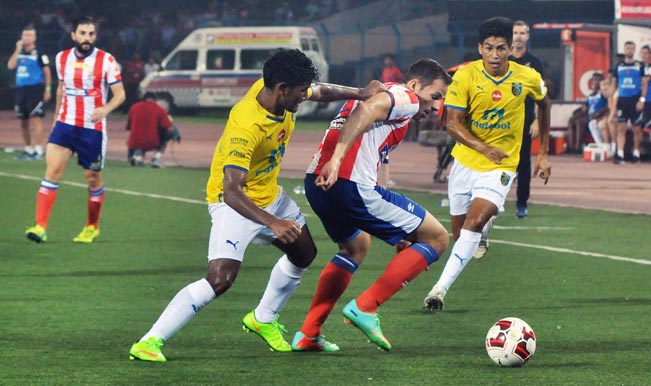 Mumbai, Dec 19: Kerala Blasters FC‘s player-cum-mentor David James has promised exciting display against Atletico de Kolkata in the grand finale of the Indian Super League (ISL) 2014 at the DY Patil Stadium in Navi Mumbai on Saturday. The teams were locked in a 1-1 draw at the Salt Lake Stadium in Kolkata while Antonio Habas’ side were denied a goal from their skipper Luis Garcia during their 1-2 away loss at the Jawaharlal Nehru Stadium in Kochi. Also Read - ISL 2021-22: SC East Bengal Signs Australian Defender Tomislav Mrcela

“I suppose they would argue that they drew the second game as well. I have seen the replay. Having won that game in Kochi it was close to say the least. Even the game at Kolkata was close, there was an opportunity that hit the bar late on. I think it will be a very good tie, it will be exciting,” the former England goalkeeper, who played in the 2010 FIFA World Cup in South Africa, told reporters ahead of the match. He expressed confidence in his players and said they have a good chance to win if they put their best foot forward. Also Read - ISL 2021-22: ISL Announce Fixture of First Round of Matches, Match Timings, Teams and Venues

“There are a few players, who will miss out through injury or suspension but everyone else will want to play. We have rotated the squad a lot during the course of the season for one reason or another and I am confident that whatever team I pick will do their best and if they do their best, they should be good enough to win,” he said.

Atletico skipper Luis Garcia said it would be a good contest between the two sides and said Kerala’s win in the league stage wouldn’t matter as the tournament has been quite unpredictable.

“In one game, anything can happen. It doesn’t matter if you have won before. We saw Chennaiyin FC arrive first, far away from the other teams and they couldn’t make it. At the end, one game, anything can happen. We will see a big game (on Saturday), a great game with the two most consistent teams in the whole season and we will see what happens,” the former Liverpool midfielder said.

James said it was ironic that the two clubs that made it to the final were owned by two cricketing greats when football was trying to make it big in the country.

“It’s quite nice that we are playing Atletico and the two biggest supported teams are playing in the final. It is also ironic that the two owners are cricketers (Sachin Tendulkar and Sourav Ganguly) and football’s trying to take over cricket so the experience has been wonderful,” the 44-year-old concluded.

The Sourav Ganguly co-owned Atletico will be without the services of their talismanic Ethiopian striker Fikru, who failed to recover from his hamstring injury and was released by the team today morning.

“I don’t want to talk about the players who are not here. We have a big squad. We will play with the players we have. As you know Fikru is injured and he cannot play. He is not fit to play. Obviously, at the end we would have liked to have two or three more strikers but we don’t,” coach Antonio Habas said.

On his fitness, Garcia said, “I think I am going to be fine. There wasn’t too much time to rest from the game we played in Kolkata. It was a tough game for us and I felt a bit tired and we decided at that moment to stop there because we got those goals at the end to go through (to the final). I hope there is no problem and I can be there tomorrow but the coach will decide.”