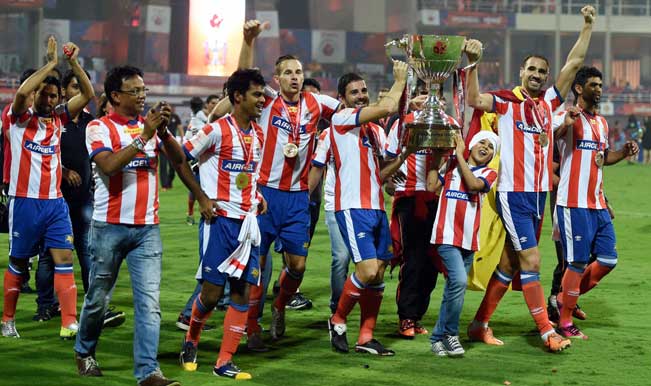 Atletico de Kolkata managed to clinch the prestigious trophy in the inaugural season of the Indian Super League (ISL) after Mohammed Rafique’s injury time header condemned Kerala Blasters FC to a 1-0 defeat. The 22-year-old substitute had played just five minutes throughout the competition before coming on as a substitute in the 74th minute at the DY Patil Stadium. However, he managed to win a corner and then headed home Jakub Podany’s delivery from the set-piece in the 95th minute to send the Red and White army into a heap of joy! Also Read - East Bengal to Play in Indian Super League 2020: West Bengal CM Mamata Banerjee

It was heartbreak for the Blasters who were thoroughly hoping for the game into extra-time. The crowd at Navi Mumbai were cheering for the Kochi outfit, which is co-owned by Sachin Tendulkar, Mumbai’s favourite son. Michael Chopra had the opportunity to score the winner in the 83rd minute. But Apoula Edel put in a rock solid shift in Atletico goal to deny the KBFC striker to produce an absolutely stunning save. Also Read - ISL: Chennaiyin FC Announce Csaba Laszlo as Head Coach For 2020-21 Season

The Kolkata outfit were without Fikru Teferra Lemessa but that didn’t bother Antonio Habas, who bravely decided to bench Luis Garcia and Jofre Mateu for the ultimate showdown. Leading the attack was Mohammed Rafi with the support of Arnal Llibert and the latter didn’t disappoint whatsoever, being a constant menace for the Blasters’ defence. Jakub Podany started at left-back but he provided complete dynamism in attack. For the Yellow brigade, Sandesh Jhingan moved to the centre of defence in Gurwinder Singh’s absence with Saumik Dey returning to on the left hand side.

The team co-owned by Tendulkar’s former batting partner Sourav Ganguly looked to penetrate right from kick-off. Baljit Sahni’s attempts failed to bother David James but that did awaken Kerala Blasters FC attackers. Victor Forcada and Ishfaq Ahmed managed to break down the other end within a matter of minutes but Atletico defence were upto the mark in preventing the midfielder’s from managing to break the deadlock early on. The game was quite dull throughout the opening half but had sudden injection of pace at some intervals.

James was called to make the first proper save of the match in the 35th minute as Llibert tried to nick Sahni’s cross into the back of thent. But the former England shots-stopper quickly narrowed down the angle to prevent Spaniard from opening the floodgates. Five minutes later, Edel went full stretch to deny Iain Hume from scoring his sixth goal of the campaign from a free-kick.

In the second-half, the ATK custodian continued to deny the Kerala Blasters FC strikers after punching away Chopra’s thumping volley. Chances were not available at a premium and Edel once again denied the 30-year-old striker in 78th minute. With just seven minutes remaining in regulation time, the former Newcastle United and Cardiff City striker had the best opportunity of the match.

Chopra managed to somehow retain control of Hume’s low cross inside the 18-yard-box – kept his composure and fired what he thought will be his first goal of the season. But to a chorus of disappointment from the crowd as well as the Blasters’ camp, Edel once again stood strong between the sticks to keep the score goalless.

With just three minutes added on at the end of the half, Rafique – who replaced Mohammed Rafi in the 74th minute – managed to win a corner off Nirmal Chettri. Into the fifth minute of added time, the diminutive 22-year-old striker managed to get his head to Podany’s cross and divert the ball past James to etch his name into the history books; helping Atletico become the first champions of the Indian Super League.

Chennaiyin FC‘s Elano, with eight goals, was awarded the golden boot while Kerala Blasters FC’s Iain Hume was given the golden ball for being the best player of the tournament. There were more accolades for the Yellow brigade with Sandesh Jhingan landing the emerging Indian player award. Jan Seda of FC Goa took  home the golden glove for maintaining seven clean sheets. Atletico’s marquee player and Champions League winner with Liverpool, Luis Garcia, was declared as the most exciting player of the league before he was given the opportunity to lift the coveted silverware.