Scores of Fans queued up to buy tickets for semi-final second leg and the Goa government wants to ensure law and order is maintained during the game. 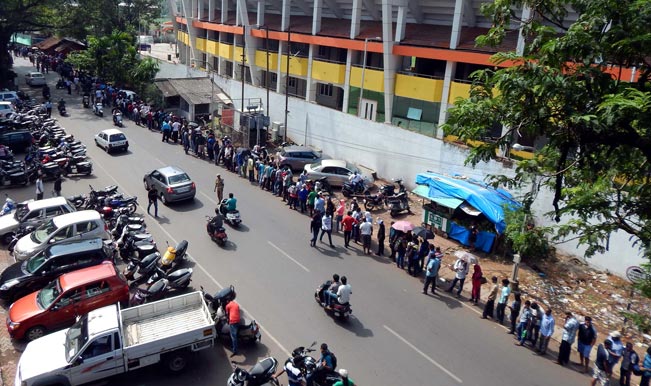 Panaji, Dec 16: The Goa government has chalked out plans to ensure that there is no law and order problem during the football match scheduled on Wednesday between FC Goa and Atletico de Kolkata as part of the the second leg of the second semi-finals of Indian Super League (ISL) 2014 at the Jawaharlal Nehru Stadium in Fatorda. Also Read - East Bengal to Play in Indian Super League 2020: West Bengal CM Mamata Banerjee

Goa Chief Minister Laxmikant Parsekar told reporters on Tuesday that all agencies have been asked to take precautions to avoid last minute mobbing as well as ensure proper regulation of crowds during the match, scheduled at Nehru Stadium Fatorda. Organisers had faced unruly crowds yesterday, after tickets for the match were sold within hours of opening the counter. Parsekar said that he has already held meetings with officials due to the unprecedented response for tickets. Also Read - ISL: Chennaiyin FC Announce Csaba Laszlo as Head Coach For 2020-21 Season

“We have also decided to put two big screens outside the stadium, so that those who don’t get the ticket can watch it there,” Parsekar said. Police had resorted to a mild lathi charge yesterday after fans went berserk after tickets got sold out and a few hoardings were burnt by them.

“Some people who could not get tickets were upset. We have made sure that the law and order situation will not arise tomorrow. The semi-finals scheduled tomorrow are very crucial as it will decide the second finalist for the coveted ISL title,” the chief minister added. The final match of the tournament are scheduled to be held at the DY Patil Stadium in Mumbai on December 20 against Kerala Blasters FC, who triumphed over Chennaiyin FC over the two legs on December 16.