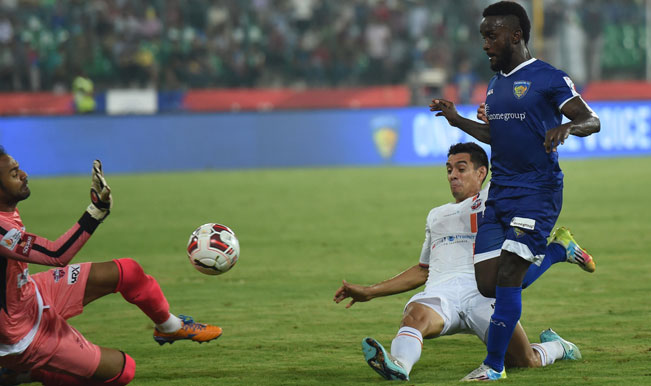 But Bruno Pelissari’s deflected effort and Jeje Lalpekhlua’s injury time strike secured all three points as well as the top spot. Both Chennaiyin and Atletico (both on 16 points) have established four-point lead at the helm but Marco Materazzi’s side cinched the top spot for the first time by the virtue of having scored more goals. Also Read - ISL 2020-21: Jamshedpur FC Sign Seasoned Goalkeeper TP Rehenesh

Eric Djemba-Djemba started for the second time since recently signing for Chennaiyin FC and returning to the starting lineup was Bojan Djordjic who came off the bench in the goalless draw with Atletico last Friday. David Trezeguet too returned to the starting lineup for FC Pune City for the first time their 1-0 victory over NorthEast United FC on November 3.

The first shot of the match fell for the home side as Mendoza drifted in from the left and sent a thundering left-footed shot just whiskers over Arindam Bhattacharya’s goal. The FCPC custodian was forced into action in the 10th minute from a corner. Mendy’s header was flicked towards goal with a clever back-heel effort by Lalpekhlua but the 25-year-old was sharp enough to parry it away and keep the scores level.

The first-half was marred by injuries as the Chennai outfit’s marquee player Elano limped off in the 16th minute with an ankle injury. Gouramangi Singh followed the Brazilian in the 32nd minute clutching his groin which he had strained earlier. The visitors made a defensive change with Andres Gonzalez replacing Daniele Magliocchetti in the 21st minute. Bruno Pelissari had a shot saved and then sent a screamer just over the crossbar as he hoped to fill Elano’s boots.

FCPC’s Jermaine Pennant too limped off during the break after a crunching challenge from Harmanjot Khabra but was fit enough to continue in the second half. The onus was on Mendoza to create something as he was the most active player apart from Pelissari for Materazzi’s boys. He did spring the home crowd on their feet with their hands raised up in delight by opening the scoring in the 62nd minute. The Colombian started the move and finished it off with a delicate chip over the onrushing Arindam.

The lead lasted just seven minutes as Davide Colomba’s powerful low cross took a deflection off Djemba-Djemba’s foot and looped over Gennaro Bracigliano to bring the visitors back on level terms. But much to FCPC manager Franco Colomba’s dismay, Chennaiyin FC took the lead within seconds as Pelissari’s left-footed shot from outside the box took a deflection off Bruno Cirillo and rolled into the back of the net; leaving Arindam helpless.

Materazzi was continually rooting his players to go for the third goal and was telling Mendoza to surge ahead with the ball. But the former Italian centre-back was left bewildered when the 22-year-old hit the deck clutching his hamstring and had to be stretchered off. Needing just one more to go top, Pelissari had the opportunity to do so when he raced clear with just Arindam to beat. However, the Brazilian was unselfish and looked to lay off the ball for substitute Jean-Eudes Maurice but Anupam Sarkar tracked back to nick the ball away and prevent the French striker from tapping it into an empty net.

The third goal arrived nonetheless as Lalpekhlua combined with Balwant Singh and dragged his shot through Arindam’s legs to seal all three points late in injury time; thus overtaking Atletico. The Kolkata outfit have a chance to go top once again should they manage to nick at least a point against Kerala Blasters FC in the 37th match on Friday.