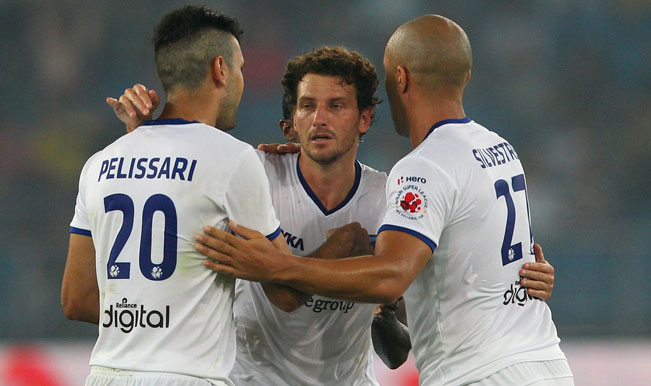 Full-Time: GOAL – CHENNAIYIN FC: The home side have the all important goal that sends them to the top of the table tonight! Balwant Singh and Jeje Lalpekhlua combine and the latter’s first time effort goes through Arindam’s legs and inside the net! Game over! The entire Chennaiyin FC camp will be elated following three injury setbacks in this match. Also Read - ISL 2020-21: Jamshedpur FC Sign Seasoned Goalkeeper TP Rehenesh

90′: A GLORIOUS CHANCE TO NICK A THIRD GOAL is SCUFFED by the home side! Pelissari latches on to a long ball from his own half and just has to beat Arindam. The Brazilian has Maurice’s support but his pass is intercepted by Anupam Sarkar.

88′: Attempt – Off-target – Chennaiyin FC: Pelissari takes the free-kick but cannot keep it inside the woodwork.

87′: Yellow Card – FC Pune City: Dharmaraj Ravanan becomes the second player from the visiting camp to pick up a booking. He brings down Pelissari who was racing forward with the ball.

81′: Attempt – Off-target – Chennaiyin FC: What a cross from Djordjic! Lalpekhlua leaps the highest but his header goes whiskers away from Arindam’s left post. Could have been game over! The home side need one more goal if they want to go on top of the table tonight!

79′: Yellow Card – FC Pune City: Anupam Sarkar picks up a booking after he caught hold of Balwant Singh, who neatly dodged him with the ball near the corner flag.

78′: Substitution – Chennaiyin FC: Jean-Eudes Maurice will be Mendoza’s replacement moments after he was stretchered off.

76′: What is happening with Chennaiyin FC? Already Gouramangi and Elano were forced off with an injury! Now, Mendoza hits the deck as Materazzi was urging him to run with the ball straight! The Colombian is in severe pain and has pulled his hamstring! Materazzi can’t believe his bad luck!

72′: Yellow Card – Chennaiyin FC: Mendy is shown a yellow card for recurrent fouls. This time he floors Pennant on the left. Also picking up a yellow card is Djemba-Djemba for dissent.

70′: GOAL – CHENNAIYIN FC: This is a commentator’s nightmare! The home side are back into the lead! Pelissari goes solo and his left-footed shot takes a wicked deflection off a FCPC defender and flies inside goal. Arindam was completely wrong-footed by that!

69′: GOAL – Equaliser – FC Pune City: Disastrous way to mark his first start for Djemba-Djemba! Colomba’s low powerful cross from the left takes a deflection off the Cameroonian and loops over Bracigliano and inside the net.

68′: Attempt – On-target – Chennaiyin FC: Chance for the home side to double their lead. Pelissari exchanges a quick one-two with Lalpekhlua but his shot is straight at Arindam.

64′: Attempt – On-target – FC Pune City: Nearly an instant response there from the visitors. Chennaiyin FC concede a free-kick and Colomba delivers a sweet cross. Katsouranis is the quickest to react and head it towards goal but its no trouble for Bracigliano.

62′: GOAL – Chennaiyin FC: John Mendoza breaks the deadlock and scores his fourth goal of the competition. He holds off the FCPC midfielders and passes the ball to Devadas, who gives it Balwant Singh. The latter hits the ball slightly away for his stride but Mendoza has the pace to get to it and chips it over the onrushing Arindam.

61′: Attempt – On-target – Chennaiyin FC: Pritam gives away possession of the ball and Lalpekhlua’s shot is straight at Arindam.

57′: Yellow Card – Chennaiyin FC: Pennant appears to be a target for the home side as Pelissari this time delivers a late tackle on the winger. The Brazilian picks up a yellow card.

56′: Substitution – FC Pune City: Trezeguet will have to wait till the next match to score his third ISL goal as he is replaced by Dudu Omagbemi.

52′: Attempt – Off-target – Chennaiyin FC: Pelissari races with the ball from his own half and finds Mendoza on the left. The #14 goes for goal, this time with his favourite foot and sends it haplessly closer to the corner flag.

48′: Attempt – On-target – Chennaiyin FC: What skill from Mendoza! The Colombian leaves Cirillo and Katsouranis flat footed and races into the final third. But he can only take a shot with his weaker (right) foot which is straight at Arindam.

46′: Chennaiyin FC commence the half but the good news for the visitors is that Pennant has returned.

Half-Time: This is such a terrible sight to see! Jermaine Pennant limps off with a knee problem after Khabra floored him with a late tackle. Just seconds later Mendy’s foul on Trezeguet gifts the visitors a scoring opportunity with a free-kick. But Gonzalez misjudges Colomba’s delicate chip and allows the ball to drift away for a goal-kick.

44′: Attempt – Off-target – Chennaiyin FC: Mendoza’s cross from the right could have ended up inside goal if not for Cirillo’s clearance. The danger is not gone as the ball remains in the final third of FCPC half. The failed attempt to control the ball from Pritam falls to Pelissari, who sweetly slams the ball but cannot keep it within the framework.

41′: Once again disturbance in the FCPC box as Chennaiyin FC which Arindam manages to divert the ball away from his goal. Djordjic then trips Pennant who was looking to launch a counter attack.

37′: Attempt – Chennaiyin FC: Nearly a goal! Nearly! Three back-to-back corners for the hosts and the last one creates problems for Arindam. Dhanachandra Singh gets a shot on target which is saved and the 25-year-old shot-stopper is finally to quell the attack.

35′: Attempt – SAVED – Chennaiyin FC: Valencia lays the ball to Pelissari, who strikes it first time with his left foot but Arindam is able to parry it away for a corner.

33′: Substitution – Chennaiyin FC: Gouramangi does return to the field in hope that he can continue. But after his failed attempt to kick of the ball has further stretched his groin and he hobbles off the pitch. He is replaced by Balwant Singh and Materazzi has called for a change of formation to 3-4-3 at the back.

31′: Khabra plays a neat one-two with Lalpekhlua but his cross lacked accuracy and FCPC clear.

29′: Oh dear! Another blow for Chennaiyin FC. Gouramangi Singh is clutching his groin and looks like he too will not play any part in this match.

26′: Colomba puts pressure on the home side from the left. He leaves Gouramangi on the floor and pulls the trigger but Mendy takes the sting off the ball and Pritam clears the ball away for a throw-in on the left-side.

22′: Attempt – Chennaiyin FC: Gonzalez’s first contribution is to gift the home side a foul after delivering a studs up challenge on Pelissari. The Brazilian takes the set-piece but his cross is gathered by Arindam.

20′: Substitution – FC Pune City: Another early change but this time its the visitors who do so. Daniele Magliocchetti is hauled off and replaced by Andres Gonzalez.

19′: Gurung is no match for Mendy’s power as the Frenchman blocks the winger to roll away for a goal-kick. No foul given!

16′: Substitution – Chennaiyin FC: Massive blow for Chennaiyin FC. Elano is in severe distress and hits the deck. He is clearly in pain and lips away with the medical staff. The Brazilian will be replaced by his compatriot Bruno Pelissari.

10′: Attempt – SAVED – Chennaiyin FC: Nearly the opening goal. Khabra wins a corner off Magliocchetti on the right. Elano’s delivery is met by Mendy inside the box which falls inside the six-yard box. Lalpekhlua tries to score with a back-heel effort which Arindam parries away with the help of sharp reflexes.

8′: Attempt – Off-target – Chennaiyin FC: End to end stuff between the two teams! Chennaiyin FC win a throw which Dhanachandra Singh launches directly into the box. Jeje Lalpekhlua gets his head to it but can only watch the ball sail over the crossbar.

3′: Attempt – Off-target – Chennaiyin FC: Nearly a goal for the home side. Mendoza comes charging towards goal from the left and creates space for himself. But his powerful effort is just over the crossbar.

1′: FC Pune City get us underway. But the home side will be looking to clinch all three points and reduce Atletico de Kolkata’s three-point lead on top of the table.

Hello and welcome to India.com’s live commentary of the 36th Indian Super League (ISL) 2014 match between Chennaiyin FC and FC Pune City. Elano’s boots will be itching as Franco Colomba’s side are the only one that he hasn’t scored against this season. The former Brazilian international has scored eight goals and is perched comfortably on top of the leader board as the nearest challenger(s) are five goals behind.

Both teams played out a 1-1 draw in their first meeting at the Shree Shiv Chhatrapati Shivaji Sports Complex as Elano missed a penalty. Today’s visitors are however bolstered by the arrival of Jermaine Pennant, who played for 79 minutes in the goalless draw against NorthEast United FC last Saturday.

The lineups are revealed. Bojan Djordjic returns to the starting lineup for the home side while former Manchester United midfielder and late arrival in the ISL, Eric Djemba-Djemba is handed his second start.