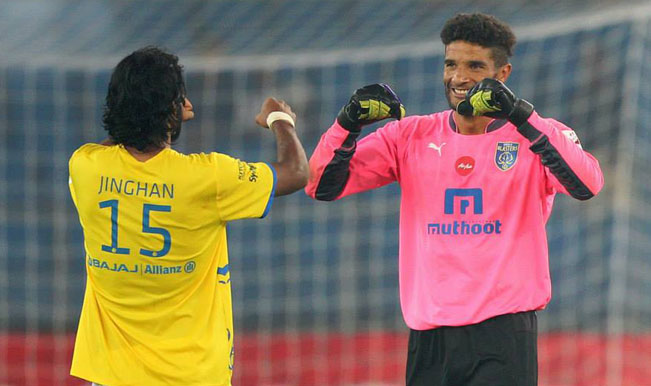 Full-Time: Atletico feel undone by the lack of goalline technology in ISL. Kerala Blasters FC have clinched all three points and close the gap on the top two to just one point. Luis Garcia had scored the equaliser but the referee made a controversial call and didn’t allow the equaliser to stand. Thank you all for tuning in tonight. See you all tomorrow for the 38th match between FC Goa and FC Pune City. Match report coming soon. Check the points table here > ISL 2014 Table & Results: Point Table and Standings Also Read - ISL 2020/21: Sylla, Angulo Score as NEUFC and Goa Share Points

90+3′: How unlucky! Luis Garcia, the man who famously scored the so-called ghost goal against Chelsea has actually scored! He slams home Fikru’s header past James. The ball bounces off the crossbar and crosses the line hits the upright and comes back in play. The ball clearly crossed the line but the linesman believes it didn’t cross the line. What drama in the final minutes. Atletico will feel robbed!

90′: There will be five minutes of added time! More than enough time for Atletico to nick the equaliser.

83′: Attempt – Kerala Blasters FC: Godwin Franco has the ball on the right but his attempted cross is more a shot and comes back off the crossbar; putting pressure on Subhasish.

80′: Yellow Card – Kerala Blasters FC: Chopra goes into a challenge with his studs showing and catches Josemi on the ankle. He should know he cannot go into a tackle that way and is shown a yellow card.

79′: Borja concedes possession in the middle of his own half and Milagres charges towards the ATK defence alone. But the 27-year-old is forced off the ball by Josemi, who puts it away for a corner.

78′: Tame attempt from Michael Chopra that does not even reach the goal.

75′: Substitution -Kerala Blasters FC: Gusmao limps away and Michael Chopra, the English player of Indian origin who played in the Barclays Premier League will be be replacing the Brazilian.

73′: Atletico are completely on the back foot. Gusmao is back on the field and is down again holding his leg. He will be taken off this time.

67′: Gusmao is down on the field and suffering from cramps. KBFC have just one substitution remaining. He is being carried away on a stretcher.

65′: KBFC need to hold on or find the third goal and put the tie to bed. Atletico got lucky to reduce the deficit but can they get the equaliser?

60′: Substitution – Kerala Blasters FC: Hengbart is taken off and replaced by Colin Falvey. Yellow Card – James is shown the yellow card for time wasting! That was an absolutely strange decision!

57′: Attempt – Off-target – Kerala Blasters FC: The home side have a corner but Jhinghan is unable to time his run and sends the ball haphazardly wide.

56′: Yellow Card – Atletico de Kolakta: Josemi talks himself into the book by arguing with the referee. That is the Spaniard’s fourth booking and he will be suspended for the next match.

54′: GOAL – Atletico de Kolkata: The visitors are back in contention and it’s none other than Fikru! Debnath’s low pass catches Hengbart off guard and as the Frenchman tries to clear, the ball bounces off Fikru’s leg and crosses the line.

52′: Yellow Card – Atletico de Kolkata: Nato picks up a booking as he raises his foot and catches Orji in the midsection.

51′: Attempt – Off-target – Atletico de Kolkata: Corner for the visitors which Mateu delivers. Nato loses his marker and goes for goal but gets under the ball and heads it over the crossbar.

48′: Gusmao is lurking in farpost but Debnath is alert to clear away Godwin’s cross for a corner.

Half-Time: What a half this has been! The fans at the Jawaharlal Nehru Stadium are on song and so are the players they are cheering for. Gusmao set up Hume for the opener and also got his name on the scoresheet for the first time this season. Do Atletico have any response up their sleeve?

45′: There will be four minutes of added time.

42′: GOAL – Kerala Blasters FC: Jhinghan delivers a left-footed cross from the right and Milagres fails to direct it goalwards with his head. Subhasish can do nothing to deny Gusmao as the Brazilian slots the ball past him without much trouble!

42′: Substitution – Kerala Blasters FC: The home side are making a change and Penn Orji is coming on in place of Raphael Romey.

38′: Another clash of heads this match! Josemi and Hengbart leap for the ball and instead their heads say hello to each other. Both players are down and will need the medical staff to intervene!

37′: Attempt – Kerala Blasters FC: How on earth have the Blasters not doubled their lead? Pearson combines with Hume and the former’s shot is hacked away by Subhasish. Gusmao is the quickest to react from the left but the ATK custodian is alert to deny the Brazilian. What a double save from Subhasish Roy Chowdhury.

35′: Attempt – On-target – Atletico de Kolkata: Baljit Sahni tries his luck this time. But clearly has to do better than that to beat James.

28′: Yellow Card – Kerala Blasters: Milagres Gonsalves is shown the yellow card for protest. Hume is down clutching his shoulder after falling awkwardly while contesting for the ball with an Atletico player. He has to go off for treatment.

25′: Attempt – Off-target – Atletico de Kolkata: The visitors are pushing for the equaliser and could have been an incredible one if that had gone in! Fikru acrobatically attempts to convert Lester Fernandes’ cross from the right but cannot keep his shot within the frame of goal.

19′: Attempt – Off-target – Atletico de Kolkata: A training ground set-piece but it fails! Mateu delivers a corner outside the box towards Borja, who volleys it well over the crossbar.

11′: Attempt – Off-target – Kerala Blasters FC: Gusmao cuts in from the right and unleashes a shot with his left-foot but it is a yard off target.

8′: Attempt – On-target – Atletico de Kolkata: James comes out of his box to clear the ball and is tracking back slowly. Borja Fernandes tries to catch the Englishman off guard and shoots from his box but the KBFC shot-stopper cannot be beaten so easily.

4′: GOAL – Kerala Blasters FC: And we have an early goal! Iain Hume scores his third goal of the season. Gusmao delivers a great cross from the left; Subhashsish can do nothing about it as Hume just pokes the ball into the bottom corner. What a start to the match!

3′: Attempt – On-target – Atletico de Kolkata: What are the Blasters defence doing? They are unlocked with a brilliant chip from Jofre allowing Fikru to go through on goal and the Ethiopian forces a save from David James!

1′: KBFC wearing their regular yellow jersey get us underway! ATK have donned their white away kit!

Hello and welcome to India.com’s live commentary of the 37th Indian Super League (ISL) 2014 match between Kerala Blasters FC and Atletico de Kolkata from the Jawaharlal Nehru Stadium in Kochi. The Blasters are looking for their third win in five matches that will put them one point behind the leaders Chennaiyin FC and second-placed Atletico, who occupy the top two places. The biggest news however is that the home side have benched Penn Orji and the visitors have benched Luis Garcia.

Both Orji and Garcia had scored the winners for their respective teams in their matches against Delhi Dynamos FC and NorthEast United FC. They surely will have a role to play from the bench.