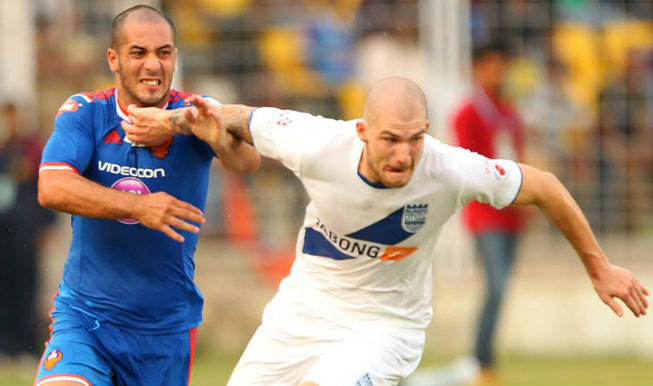 Full-Time: Another goalless draw! Didika had a chance in the first half for MCFC and Moritz shattered the crossbar in the 84th minute. The visitors too had chances with Ozbey striking the upright and Romeo Fernandes forcing a save off Subrata late on. Yet another cleansheet for the 27-year-old shot-stopper. Match report will follow soon. Atletico de Kolkata remain top while both sides gain a point but retain their position in the league table. Thank you for tuning in tonight; see you all tomorrow for the Eastern debry as Atletico de Kolkata take on NorthEast United FC at the Salt Lake Stadium. Also Read - ISL 2020-21: Jamshedpur FC Sign Seasoned Goalkeeper TP Rehenesh

90′: Attempt – Off-target – Mumbai City FC: It appears to be going for another goalless draw as Nadong Bhutia curls a shot well wide of Seda’s goal. We have four minutes of added time.

88′: Substitution – FC Goa: Ranti Martins will get an opportunity to break the deadlock as he replaces Ozbey.

86′: Attempt – SAVED – FC Goa: Ozbey finds Romeo with a neat through ball behind MCFC defence. The substitute cuts in on Costa and leaves Cmovs stranded to try and beat Subrata on his near post. But the MCFC shot-stopper does well to not concede in the final minutes.

84′: Attempt – OFF THE POST – FC GOA: Just seconds after Bikramjit’s effort was blocked, Tolgay Ozbey finds enough space down the centre. Subrata fails to reach the ball but is very very lucky to watch the ball bounce back off the upright and remain in play.

82′: Three corners on the trot for FC Goa but Subrata and his defenders do exceptionally well to prevent a goal. Attempt – OFF THE BAR –  Mumbai City FC: Moritz is just unlucky to not have scored his fourth goal. The Brazilian shoots from 25-yards-out but can watch it bounce off the crossbar.

80′: Nearly a goal there for the visitors. Romeo Fernandes creates enough space on the right wing. His cross takes a deflection off Cmovs and nearly wrong-foots Subrata, who manages to parry it away for a corner.

73′: Yellow Card – Mumbai City FC: Ozbey is brought down by a challenge from Cmovs. The referee blows his whistle much to the dismay Czech Republican defender’s dismay. Andre Santos takes the shot but the ball loops towards Subrata after deflecting off the wall. The MCFC shot-stopper manages to collect the ball despite challenges from the visiting attackers. The referee blows gives the home side a free-kick. Mumbai City FC are further furious that Ozbey kicks the ball away as Subrata tries to take it quickly.

68′: Attempt – On-target – FC Goa: Andre Santos had won a corner just before the substitution took place and Amiri gets his head to it but that’s an easy gather for Subrata.

67′: Substitution – FC Goa:  Robert Pires will play no further part as he is replaced by Zohib Islam Amiri.

63′: Attempt – Off-target – FC Goa: Andre Santos shows why he was not revered by Arsenal fans as he haplessly sends a shot across the face of goal.

60′: Attempt – Off-target – Mumbai City FC: Mondal manages to win a corner on the right which is taken short. Friedrich connects his head to Moritz’s cross and sees the ball fly just over the crossbar.

56′: Attempt – Off-target – Mumbai City FC: Bikramjit gives the ball away in the middle and MCFC launch a thundering counter attack. Anelka receives Stohanzl’s pass and crosses it to the arriving blue shirts. Debabrata first heads it away only as far as Moritz, who skies the effort well over Seda’s goal.

50′: Didika is injured but FC Goa continue to play and Pires plays the ball to Ozbey, who is standing unmarked on the left. Costa recovers and nicks the ball away before the Goan striker pulls the trigger. The defender too injures himself in the process and play halts momentarily so they can be treated.

47′: FC Goa get us underway and Ozbey uses deceit to win a corner early on. The visitors are unable to take advantage of the set-piece as the ball rolls clear to Subrata.

Half-Time: That was the last significant action from either side as both sides play out the one minute of added time attempting to keep possession. Nobody wants another goalless draw between the two sides. Will we see a breakthrough in the second-half? Ralte’s effort

41′: Attempt – SAVED – Mumbai City FC: Moritz cleverly flicks the ball over Bikramjit and plays a neat through ball for Didika, whose shot is saved well by Seda.

40′: Attempt – Off-target – FC Goa: MCFC lose possession in the middle of the field and Ozbey gets the ball from Santos. Under challenge from no one, the Australian threatens to end Subrata’s cleansheet but the ball flies a couple of yards away from the upright.

39′: Attempt – Off-target – FC Goa: Letzelter is adjudged to have brought down Ozbey in the middle of the field and FC Goa have a free-kick. Santos’ delivery is headed over the crossbar by Bengelloun.

37′: Pires goes for glory from 30-yards out but the ball comes off Ozbey and falls to Gabriel, whose failed shot is gathered by Subrata.

36′: Attempt – Off-target – Mumbai City FC: Great buildup play from the home side Peter Costa’s cross from the left is picked up by Moritz, who chests it and tries an audacious overhead kick but sends it off-target. Could have controlled the ball and done better in my opinion.

34′: Jesus Christ! Subrata has always been on the receiving end of challenges in this competition. Bengelloun smashes into the MCFC shot-stopper as he tries to gather an aerial delivery. No booking for the Frenchman.

30′: Attempt – FC Goa: Gregory Fernandes darts through the middle of the field unchallenged and drives a low shot towards the bottom corner. Subrata goes full stretch and makes very slight contact to deflect it away for a corner.

28′: Yellow Card – FC Goa: Mandar Desai picks up the first booking of the match as he loses control of the ball and then brings down Mondal, who was looking to launch a counter attack.

24′: Peter Reid will be slightly delighted as his side are attacking well. Anelka looks to turn provider as he crosses the ball from the left to find Subhash Singh; forcing Bengelloun heads the ball clear.

20′: Attempt – Off-target – Mumbai City FC: Great build up play from the hosts as Mortiz’s pass finds Subhash Singh avoiding the flailing leg off Narayan Das. But the Manipuri lad terribly scuffs his shot! Could have been the opening goal this!

19′: What a run from Stohanzl as he covers more than half the ground with the ball, evading challenge after challenge. But the the Czech Republican midfielder is unable to find a blue shirt with his cutback and FC Goa break clear.

16′: Attempt – Off-target – Mumbai City FC: Lalrindika Ralte ventures into the middle of the field, tries to curl one into Seda’s far post but hits it awfully wide. The 22-year-old claims he was tripped but the referee is not keen on giving a free-kick.

12′: Attempt – Mumbai City FC: Mortiz’s free-kick causes havoc in the Goan defence and Stohanzl’s shot is deflected away for a corner. Moritz once again is at the set-piece and once again the visitors struggle to clear and Cmovs’ attempt is narrowly deflected away from goal and MCFC win another corner. This time though FC Goa manage to clear their lines.

9′: Attempt – On-target – FC Goa: MCFC must be wary of Mandar’s left foot as the 22-year-old unleashes a left-footed effort from 30-yards out. But the shot is not much trouble for Subrata.

5′: Attempt – Off-target – Mumbai City FC: Nearly a goal for the home side. Anelka robs Arnolin off possession and lobs it over Seda, who is well off his line but the French striker cannot keep his shot within the frame. Lucky escape for FC Goa.

4′: Attempt – Off-target – FC Goa: Neat skill from Mandar to avoid the challenge from Deepak Mondal and play the ball to Andre Santos. The former Arsenal man returns the ball with a clever chip behind MCFC defence but the winger’s attempt from a tight angle flies over Subrata’s goal.

1′: Mumbai City FC commence the proceedings and have ended up winning a free-kick inside the circle early on.

Can Mumbai City FC register their fourth victory in front of their fans and go top of the league table? FC Goa are searching for their second win on the trot. It was a goalless affair between the two sides when they met at Fatorda but our prediction will be 2-1 delight for the home team with Nicolas Anelka and Andre Moritz finding the net for Peter Reid’s side. Kick-off coming in less than three minutes.

Skipper Syed Nabi remains unavailable but Andre Moritz is fully fit and replaces Tiago Ribeiro. The rest of the starting lineup remains the same as it was in last Wednesday’s goalless draw against Kerala Blasters FC. FC Goa coach Zico too has just made one change with Gabriel Fernandes replacing Peter Carvalho as he hopes the winger will penetrate the MCFC defence.

Hello and welcome to India.com’s live commentary of the 34thIndian Super League (ISL) 2014 match between Mumbai City FC and FC Goa from the DY Patil Stadium at Nerul, Navi Mumbai. Both teams played out a goalless draw in the reverse fixture earlier this month but the focus is bound to change as the race for the semi-final spots heats up with just six matches left to play.

MCFC are currently in fifth place with 11 points and a win will propel them to the top for the first time. Zico’s side on the other hand are aiming to keep their chances of a top four finish alive with a second straight victory for the first time this season. FC Goa are currently second from bottom in the eight-team league with eight points from eight matches. You can find out the live streaming details here.