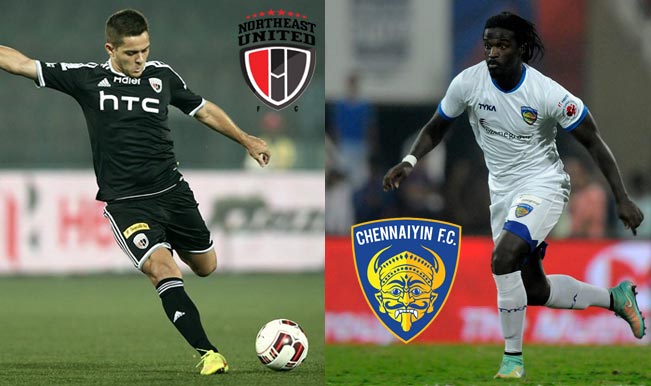 90′: Attempt – Off-target – Chennaiyin FC: Nothing more than a consolation if this would have gone in! Pradeep tries his luck from 30 yards out but his shot metres away from goal.

79′: Yellow Card – Chennaiyin FC: Mendy gets the yellow card for cynically bringing down Miguel Garcia, who looked to launch a counter attack.

78′: Attempt – Chennaiyin FC: Hidalgo wriggles away  with the ball and finds Balwant Singh inside the box, whose pass/shot is deflected away for a corner.

72′: RED CARD – NorthEast United FC: Chennaiyin’s quest of finding three goals gets a slight aid! Capdevilla’s elbow catches Maurice on the face and it’s a second yellow card for the Spaniard. He has to hit the showers early now! NEUFC are  down to 10 players.

67′: Substitution – Chennaiyin FC: Denson Devadas is injured and has to be replaced. NP PRadeep is the man replacing him.

66′: Attempt – On-target – NorthEast United FC: The home side are not content with three goals. Leo Bertos tries his luck from 25-yards out but his low effort is easily blocked by Bracigliano.

60′: Attempt – SAVED – Chennaiyin FC: Maurice takes advantage of the stray ball which Massamaba and Balwant Singh cannot control and goes for goal but Rehenesh parries it away for a corner.

50′: OFFSIDE – Chennaiyin FC: Hidalgo, who netted a stunning free-kick against Mumbai City FC, has put the ball past Rehenesh. However, he knows it and so does the linesman that he was more than a yard offside!

46′: Substitution – Chennaiyin FC: Jayesh Rane and Cristian Hidalgo are coming on in place of Pelissari and Jeje Lalpekhlua.

Half-Time: Three minutes of added time at the end of 45 minutes It is totally frustrating for the visitors! The leaders – 3-0 down against the bottom most team in the ISL! Clearly displays Elano and Mendoza’s absence is proving costly.

41′ Chennaiyin still looking clumsy at the back and it seems as though they have shifted to a back three. Jeje is put through on goal and he has the chance to get one back but Rehenesh comes out and makes a timely interception to clear the ball out to safety.

36′ Now it’s Len’s turn to miss a sitter and the NorthEast bench are furious as they could have embarrassed Chennai at this point in time. Yet again, the defence is nowhere to be seen and Len is through right through the middle. He cuts inside and takes a shot but it flies to Row-Z.

35‘ A good chance squandered by Boro as he was running through on goal. There was absolutely no one to pick him up and had only the goalkeeper in front of him and he hits the ball straight to the goalie.

32′ NorthEast are so comfortable on the ball and it takes not more than five seconds to shift the ball from one end to other and the ball is floated to Len from Felipe but the striker is inches away from heading the ball in. Almost a fourth there.

30′ It’s a a skirmish from two sides and the referee does well before things turn ugly. Miguel Garica and Mendy tussle for a ball and shirt pulling from both sides evokes a reaction from both players and there is shoving.

22′ Goal!!! Massamba! The crowd is going delirious and its Moussamba again. Yet again, it’s a free-kick that results in the goal being leaked for Chennaiyin, who are still stunned from the goal glut. Koke lobs the free-kick from 35-yards out and the ball is headed in Moussamba, who yet again outjumps the hapless defenders and its 3-0.

21‘ Goal!! Massamba! Corner is taken by Koke and Chennai’s defence is in shambles and Moussamba is in the near post and the ball is headed in after the hulking figure towers past two defenders.

20′ The free kick is taken and Chenniayin get away narrrowly after a low shot is parried by the keeper and the ball has gone behind for a corner.

18‘ NorthEast, yet again are swamping the Chennaiyin territory with numbers and it has resulted in a free kick. Koke will take the Free Kick.

10′: GOAL – NorthEast United FC: Fortunate goal for the home side! Djemba-Djemab attempts to head clear Adinga’s left footed cross from the right but the ball ricochets off Doungel’s back and falls to Durga who just taps it home! Typical poachers goal!

6′: Attempt – Off-target – NorthEast United FC: The home side kick-start the game but the first shot of the match comes in the sixth minute. Kondwani Mtonga gets his head to the ball from the corner but sends the ball over the crossbar.

Hello and welcome to India.com’s live coverage of the 42nd Indian Super League (ISL) 2014 match between NorthEast United FC and Chennaiyin FC from the Indira Gandhi Stadium in Guwahati on Thursday. The visitors are remain without Elano, John Mendoza and Gouramangi Singh and are looking to register their third straight victory on the trot.