Ganguly hopes to revive Atletico de Kolkata's fortunes as he hopes for his team to qualify for the semi-finals by finishing on top of the table. 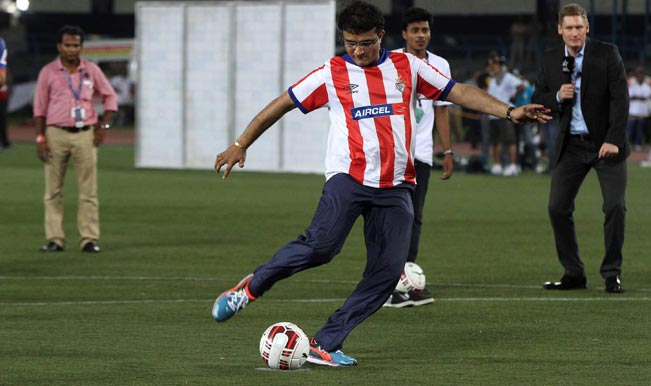 Kolkata: Struggling in the business end of the tournament, Atletico de Kolkata will be boosted by the presence of their team co-owner Sourav Ganguly as they make a bid to make the semifinals of the ongoing Indian Super League (ISL). The cricketer-turned-commentator Ganguly said he would give the first and second Test in Australia a miss and instead travel with his ISL franchise to Pune and Delhi. Also Read - Rohit Sharma's Injury More Severe Than Believed Initially: Reports

“I will only go for the third and fourth Test. It’s an important stage of the tournament with last four games to go before the semifinals. So I will be travelling with the team,” Ganguly told reporters on the sidelines of a promotional programme with team sponsors Aircel. That would mean Ganguly will stay till the ISL summit clash on December 20 before resuming his commentary assignment for the India-Australia third Test beginning on the Boxing Day. Also Read - India vs Australia 2020: Dilip Vengsarkar Wants BCCI President Sourav Ganguly to Question The Motive Behind Ignoring Suryakumar Yadav

Earlier, team co-owner Utsav Parekh had said the former India skipper would give the embattled team a peptalk tomorrow at the team hotel, but Ganguly denied any such development.

“I will travel to Pune and hopefully we’ll get three points. As of now, I’m not sitting with the players at this stage,” he added.

Lack of goalline technology had robbed ATK of a draw against Kerala Blasters FC as the assistant referee had ruled out a sure-shot goal in ATK’s favour when Luis Garcia’s stoppage time shot had crossed the line after coming off the cross piece. The former India captain had earlier expressed his anguish on Twitter.

“I’ve not seen a football team be on the receiving end as ATK… If the second goal of Garcia is not a goal then rules football have changed,” Ganguly had written on his twitter handle. In the aftermath of their 1-2 defeat in Kochi, there had been reports of differences between their manager Antonio Habas and the captain Garcia, but Parekh stressed that there was no such issue.

The former Liverpool star reportedly had an open talk with few of the Indian and outstation players who felt they were not given enough chances. Reiterating that the house was in order, Parekh said: “When he (Garcia) started talking to the players, something or the other came up for discussions and 30-40 minutes elapsed in this way. Even players are also disappointed with the way things are going and they have a feel that there’s something amiss.”

Incidentally, both Garcia and Habas along with other star players like Fikru Teferra, Jofre Mateu and Ofentse Nato among others did not attend the practice which was attended by only 12 players today. Parekh said it was an optional practice. He also pointed out that the team was still no 2 and things would have been different had the refereeing decisions not gone against them.

“We would have been on par if the goal was given. Two very important decisions have gone against us. From no possible angle, it was not a goal. But as you say, this is part and parcel of the game. We have nothing to say. Jofre given a second yellow instead of getting a penalty in our match against Chennaiyin FC. There was no doubt that Jofre was tripped in the box,” he said referring to their away match against the Chennai outfit.

Parekh said the goalline technology would come into place next year while the players’ draft system might be done away with.

“There’s no doubt that goalline technology will come into place next season. I’m not sure whether FIFA will allow for a decision review system.”

He further said the draft system is likely to be withdrawn next season.

“Team building would be the main thing next year. We had to choose from PDS this year. We had no role to play. But if we think somebody is playing well then we can obviously rope in him. We can build our team in our own way. The organisers have already informed us. I think we are capable of bringing good players on our own from India and abroad. Most likely teams will be allowed.”

Meanwhile, the high profile Atletico Madrid manager Diego Simione is likely to come for the ISL semifinals, Parekh said. ATK have just one home match left, against Goa, on December 10 and Parekh said there would be a host of Tollywood artists and popular singer Arijit Singh who would perform on the day.