Sunil Chhetri was one of the top Indian players who decided not to participate in the Indian Super League. 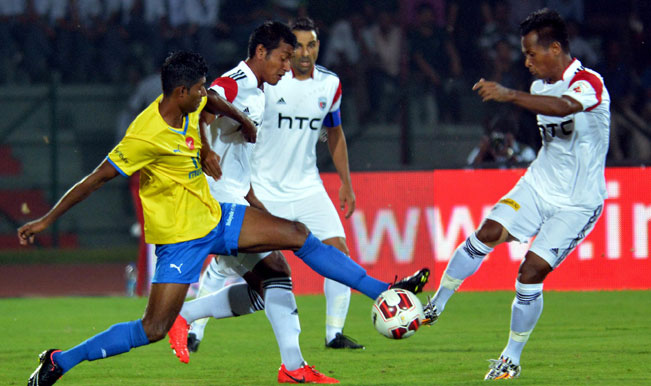 New Delhi, Nov 19: Impressed with the performance of some of the youngsters playing in the ongoing Indian Super League, India captain Sunil Chhetri on Wednesday said that they deserved to be considered for national team selection. The likes of C S Sabeeth, Balwant Singh, Durga Boro, Cavin Lobo and Sandesh Jhingan have done well in the ISL for different franchise teams and Chhetri said that the new national team coach could have a look at these players. Also Read - ISL 2019-20: Mumbai City FC Sign Adam le Fondre on Season-Long Loan

“Some of the young players have done so well in the ISL and I am impressed with their performance. I think whoever comes as India coach will have a look at these players (for selection),” Chhetri said. Some of these players have made it to the India squad but have not played regularly for the country. “The ISL has given them a platform to show their capability. I hope they continue with their performance,” he said at the sidelines of an event to announce a 4 vs 4 football league for children from 6-14 years of age. Also Read - India Records Lowest COVID-19 Deaths in 3 Months; Total Tally Surpasses 7.5 Million | Key Points

Chhetri also felt that the inaugural ISL has got superb reception from Indian football fans and hoped that it could “sustain” the popularity.

“The ISL has been received very well by the football fans. The tournament has been shown in many channels, including in High Definition and you can access to it in other formats. It has been marketed well. I hope the tournament sustains its popularity in future editions also and keep on growing,” said the 30-year-old striker.

Asked about his own chances of playing in the future editions of ISL, Chhetri, who has one more year in his two-year contract with I-League champions Bengaluru FC, he said, “I have not thought about it”.

“We (Bengaluru FC) are going to play more than 30 matches in the next six months, including the I-League, Federation Cup and AFC Cup. We are very serious about doing well at the Asian club level,” he added. Chhetri said that India had a mixed result during Wim Koevermans’ a little over two-year stint as head coach but said that the blame should not be laid on the Dutchman.

Koevermans’ contract ended last month and the All Indian Football Federation has been in search of his successor.

“Our performance was a mixed result under Koevermans. We began with a bang with a Nehru Cup win but finishing runners-up at the SAFF Championships last year (after losing to Afghanistan in final) was a debacle,” he said. “But we should not blame it on Koevermans. We had a well-settled team before Koevermans came, which included some top names in Indian football. So, after they left, we had some new faces and we had to adjust,” he added.

Asked how much Indian football standard has improved in the few years he has been the captain of the national side, he said, “It’s not that it has not improved but, of course, it has not improved at the pace it should have. He said he wondered how India of more than one billion population would be below Iraq or Lebanon in FIFA world rankings.

“We have 1.3 billion population and see at these countries like Iraq, Syria and Lebanon. These small countries are ahead of India in FIFA rankings. How can you explain this. We are in the 20s in the rankings among Asian countries. It is sad,” he said. Chhetri said grassroot programmes like the 4 vs 4 league for schoolchildren were the way forward if Indian football has to improve its profile.

The Delhi leg of the league, which began on November 16, has got registration from 150 schoolchildren so far and it will continue for another seven Sundays at a city school.

“We will select 25 elite children from the 4 vs 4 league which will continue for another seven Sundays. We will groom them and give them foreign exposure. If any kid is talented enough, he can get training at the FC Metz Academy in France. This league has been running in Dehradun, Mumbai and Pune and we have enrolled more than 1000 children in these leagues. Along with Delhi, we are starting in Pune and Bengaluru,” Eric Benny, the brain behind the league said.

Explaining about the rationale for choosing the 4×4 format, Benny said, “It is a format which is in the curriculum of the academies in Europe. It is the best format for skill development. In this format, there will be four players each side instead of 11 players. “The player gets tighter space, he has to decide what to do the ball in a short time,” Benny concluded.