Check out the latest standings and points of ISL 2014. 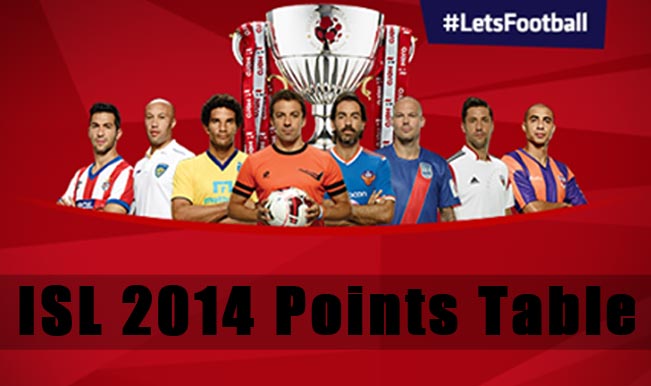 With just one semi-final spot up for grabs, Atletico de Kolkata needed a point from their final Indian Super League (ISL) 2014 match in the round-robin stage against FC Goa at the Salt Lake Stadium. Zico’s side took the lead through Edgar Marcelino’s thundering volley to stun the home side. However, Fikru came to the rescue after he won and converted a penalty in the second-half; that also resulted in Bruno Pinheiro being sent-off for the visitors. The game ended 1-1 much to the dismay of Delhi Dynamos FC, who could have progressed if Antonio Habas’ side had lost on Wednesday. Also Read - HFC vs JFC Dream11 Team Prediction Indian Super League 2020-21: Captain, Vice-captain, Fantasy Playing Tips, Predicted XIs For Today's Hyderabad FC vs Jamshedpur FC ISL Football Match at Tilak Maidan Stadium, Vasco 7.30 PM IST December 2 Wednesday

The result in Kolkata rendered Mumbai City FC‘s clash against NorthEast United FC meaningless in terms of the stakes. It was all about pride and both sides played out a 1-1 draw in the second game for Wednesday. Koke’s penalty put the home side ahead in the 34th minute. Peter Reid’s side turned the screw and tried hard and managed to get the equaliser in the 85th minute when Sushil Singh headed home Jan Stohanzl’s cross. Also Read - ISL 2020/21: Sylla, Angulo Score as NEUFC and Goa Share Points

Kerala Blasters FC became the third team to secure a place in the semi-final post their 1-0 win over FC Pune City on Tuesday. It was a winner takes it all clash and David James’ side managed to complete the double with the help of Iain Hume’s free-kick coupled with some excellent goalkeeping from Sandip Nandy and the defenders’ resilience.

Delhi Dynamos FC too kept their chances alive by a thread and their progress solely depends on other results. Harm van Veldhoven’s side were up against league leaders Chennaiyin FC and managed to eke out a 2-2 draw after trailing by two goals at half-time. Bruno Pelissari and Jeje Lalpekhlua scored for Marco Materazzi’s side but Alessandro del Piero’s free-kick and Hans Mulder thunderbolt earned the visitors a point at the Jawaharlal Nehru Stadium in Chennai in the first match played on Tuesday.

The result puts national capital outfit level on points with Atletico de Kolkata at 18, who must lose to FC Goa by a two-goal margin and hope Mumbai City FC don’t beat NorthEast United FC by a considerable margin.

Mumbai City FC broke their six-match winless run after registering a narrow 2-1 win over Atletico de Kolkata at the DY Patil Stadium in Navi Mumbai on Sunday. The hosts took the lead in the first-half courtesy of Lalrindika Ralte’s strike. But a clever free-kick routine from the visitors allowed Baljit Sahni to tap home the equaliser. However, vice-captain Manuel Friedrich rescued Peter Reid’s side by heading past Apoula Edel in the 76th minute to secure all three points.