Pakistan pacer Junaid Khan has taken to Twitter to react over his omission from the World Cup squad. Despite being included in the 15-man provisional squad the 29-year-old has been dropped, with Mohammad Amir selected and Wahab Riaz brought in from the international wilderness for the tournament which starts on May 30. Also Read - Players Get Proper Run in Pakistan Team if They Are Close to The Captain: Junaid Khan

On his official Twitter account, Junaid shared a cryptic picture on his social media account after he was removed from the WC squad by Pakistan national selectors. The 29-year old posted a picture of himself on Twitter with black tape on his mouth and wrote: “I dont want to say anything. Truth is bitter. (Sach karwa hotha hai).” However, a few hours later Khan deleted his tweet. Also Read - T20 World Cup Preparations are on Right Track: Babar Azam 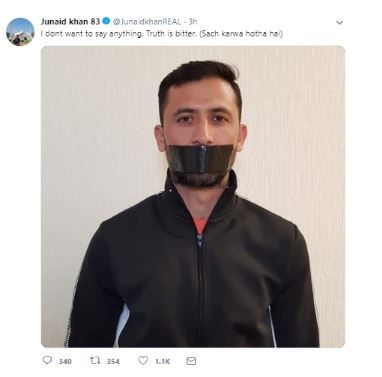 Khan found a spot in the preliminary World Cup squad which was announced on April 2018. However, after the conclusion of their five-match ODI series against England, Pakistan named their final World Cup squad on Monday, from which his name was dropped. Also Read - BCCI Assured of Visas to Pakistan Players For 2021 T20 World Cup

Khan is not the only player who was ruled out of the final squad after being named in the preliminary squad. Abid Ali and Faheem Ashraf were among the other players who will not get to participate in the quadrennial tournament.

After the first match got abandoned due to rain, Pakistan faced a 4-0 defeat in the hands of England. But despite the defeat, it appears to be like the series helped Pakistan to choose their squad going in the premier tournament.

Pakistan will compete with West Indies in their first World Cup 2019 clash on May 31.