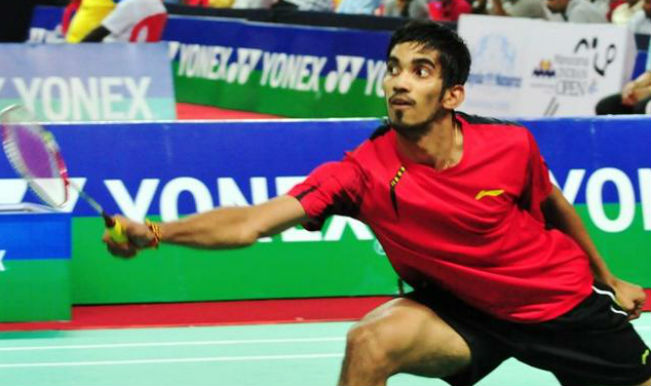 Hong Kong, Nov 22 Leading Indian shuttler Kidambi Srikanth’s good run in the $350,000 Hong Kong Open Super Series came to an end as he lost to top seed Chen Long of China in the men’s singles semifinal on Saturday. The World No.10 Indian lost 17-21, 21-19, 6-21 to the reigning World Champion in an hour and four minutes at the Hong Kong Coliseum. With his loss, India’s campaign ended at the last Super Series event of the calendar. Also Read - Denmark Open Badminton 2020: India's Kidambi Srikanth Storms Into Quarterfinals

Chen showed his class from the start, rattling the Indian with sharp movement and regal smashes. He took a 5-1 lead which increased to 10-3 in no time before the 21-year-old Hyderabadi earned four straight points to reduce the gap (7-10). Srikanth was also helped by Chen, who hit some shots wide. The Guntur-born lad, who defeated five-time World Champion Lin Dan to clinch the China Open title Sunday, slowly got into the groove and gave a tough fight to equalise at 17-all. However, the 25-year-old Chinese finished the game in emphatic fashion, winning four successive points. Also Read - Denmark Open 2020: India's Kidambi Srikanth Beats Toby Penty to Enter 2nd Round

As soon as the second game began, Chen got back into business. But his class and quality was challenged at every angle by a gritty Srikanth, who managed to win the game and level the match. After conceding a game for the first time in his career against Srikanth, Chen hit back with vengeance in the third game and raised the bar several notches higher to which Srikanth had no answer. The Indian’s defence was caught napping against Chen’s smashes. The World No.2 won the game and match to enter the final and take a 2-0 lead in career meetings over Srikanth.