Karva Chauth 2018: It seems the cricketers are busy giving couple goals on the auspicious occasion of Karva Chauth.

Karva Chauth 2018: It seems the cricketers are busy giving couple goals on the auspicious occasion of Karva Chauth. The wife fasts throughout the day for the healthy and long life of their husbands. Initially, India captain Virat Kohli shared a picture with Anushka Sharma after slamming his 38th ODI ton against the Windies, now we see other cricketers join the bandwagon. Yuvraj Singh, Harbhajan Singh, and Suresh Raina shared their moment on Instagram. Also Read - Coronavirus: PM Narendra Modi Praises Suresh Raina For Donation to COVID-19 Relief Funds in Quirky Fashion | POST 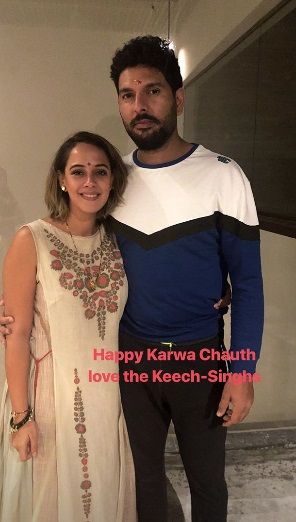 Here is Harbhajan along with Geeta Basra.

And then Suresh Raina also shared a picture of him with his wife Priyanka.

Meanwhile, Kohli’s ton did not help India win the 3rd ODI against Windies. But, he broke many records with his 38th ODI hundred.

He became the first captain to score three consecutive centuries, apart from becoming the first player to score four consecutive centuries against an opposition (v Windies). The India captain also became the fastest to 6000 ODI runs in Asia, surpassing Sachin Tendulkar to the feat. Kohli also joined Rahul Dravid and Sourav Ganguly to become the only cricketers to score 8000 runs in international cricket in India.

Kohli joined Kumar Sangakkara and Ricky Ponting to become only the third batsman to score 8000+ runs batting at No 3, apart from joining Sourav Ganguly, AB de Villiers to become the only captain to score most centuries in an ODI series/tournament.

The series is locked at 1-1 with two more games to be played. The 4th ODI will be played on October 29.