Opting to bat first after winning the toss, Beckenham CC lasted 49 minutes on the crease and Bexley CC chased down the target in just 12 minutes.

In a one-of-its-kind incident happened during the Shepherd Neame Kent Cricket League in England, a target was chased down within record 12 minutes and the match was ended in 61 minutes between the two first-class English teams. Beckenham Cricket Club, a leading multi-sports and social club in North West Kent with picturesque surroundings suffered their worst fate on the Manor Way cricket ground in Bexley. Also Read - Youngsters Preferring IPL Over England Cricket Can Say Goodbye: Michael Vaughan

Beckenham CC, a cricket team in the Shepherd Neame Kent Cricket League, were bowled out for the lowest ever total in the 152 years of the club’s existence. The total was also the lowest in the league’s history as well. Also Read - IND vs ENG: England Cricket's Leadership Power Lies With Eoin Morgan Not Joe Root, So he Gets What he Wants, Says Michael Vaughan

During a Senior first XI game between Bexley CC and Beckenham CC, all the batsmen of the visiting side took the long walk to the pavilion as they were all-out for 18 runs. Their innings lasted for merely 49 minutes. The opponents Bexley CC took only 12 minutes to chase down the nothing target with all wickets in their hands. Also Read - Ben Stokes feels England Can Beat Most Team if They Play Their Best Game of Cricket

Earlier, the visitors – Beckenham CC won the toss and elected to bat first on a neutral pitch which had no demons in it. But, a fiery spell of the hosts’ bowling duo of – Calum MacLeod and Jason Benn wreaked havoc in the opposition camp in no time. MacLeod returned with impressive figures of 6 wickets for 5 runs for the hosts, while Benn also picked up a four-wicket haul to rattle the hapless batting unit. 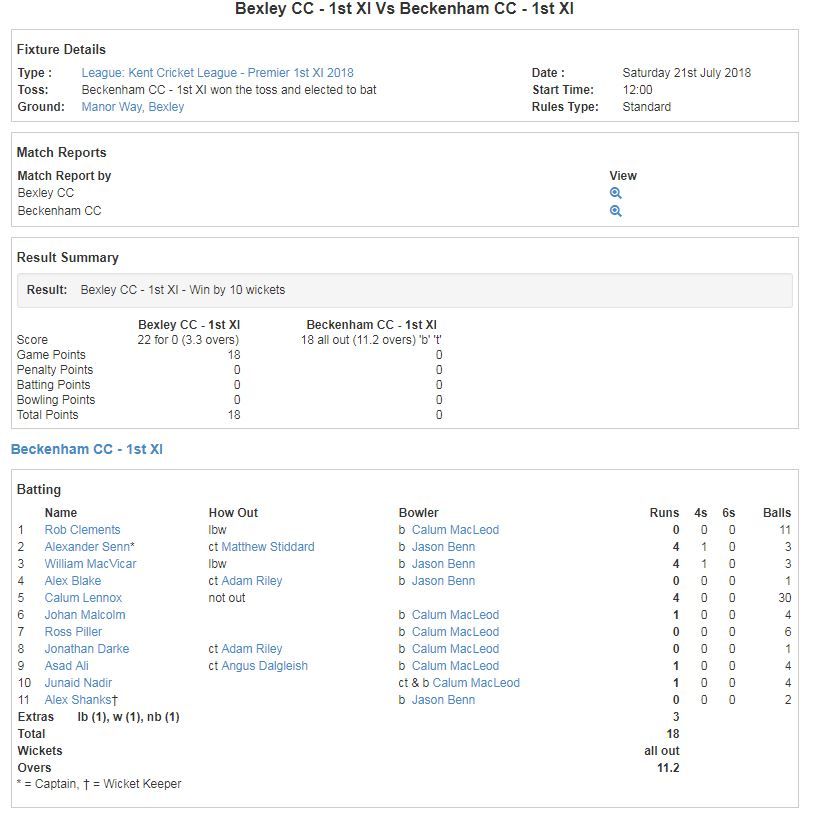 The first wicket of Beckenham’s innings was of opener Alexander Senn, who fell for the score of 5. The wicket marked a weird collapse which has rarely been witnessed in the history of the gentlemen’s game. Out of eleven, five batsmen failed to get off the mark and were out for nought. None of the batsmen from the Beckenham camp managed to touch the double-digit score.

Alexander Senn (4), William MacVicar (4), Calum Lennox (4), Johan Malcolm (1), Asad Ali (1) and Junaid Nadir (1) were the only ones to touch single figures. Out of 18, Bexley gave away 3 extras while bowling to swell the below-poor score of Beckenham CC.

The dismal performance have evoked a debacle as Beckenham comprised of players with playing credentials ranging from international through County to County 2nd XI level and Minor Counties. 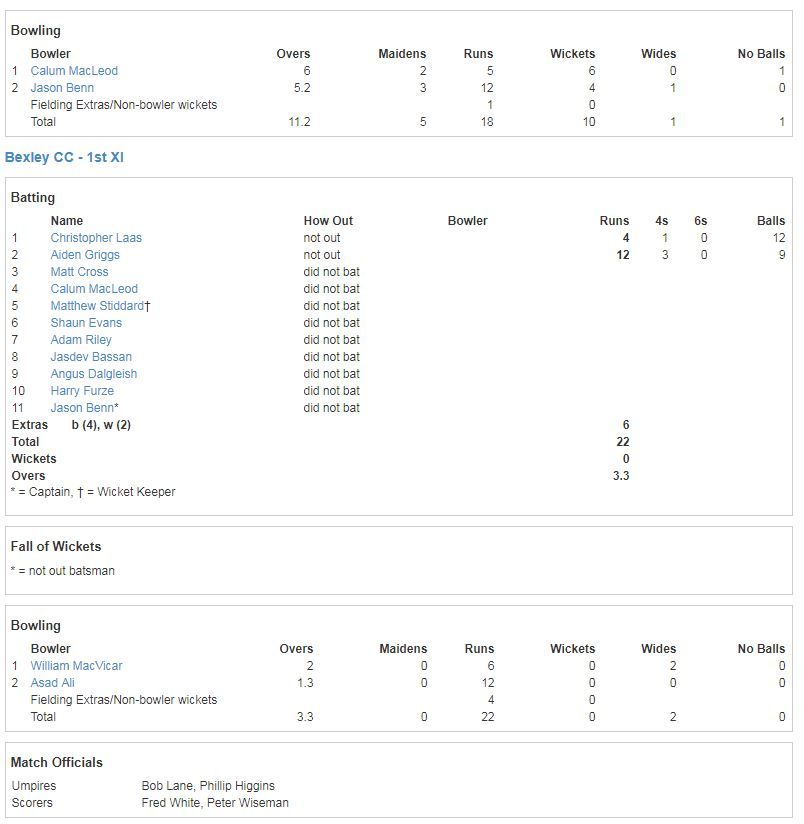 Chasing 18, Besley’s openers – Christopher Laas (4) and Aiden Giggs (12) nailed down the up the target in 3.3 overs exactly in 12 minutes without troubling the scorer in the wicket’s column.