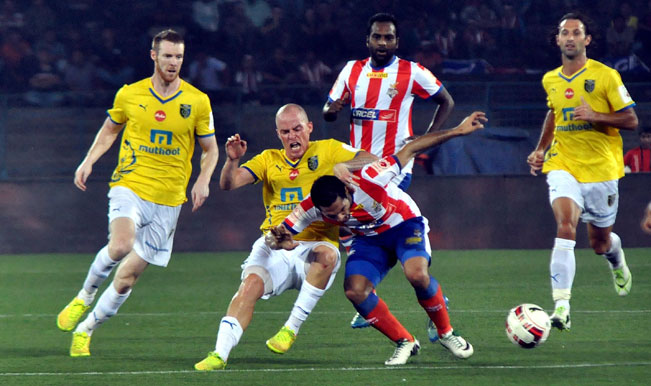 Kochi, Nov 20: When they clashed in the first leg, it was billed as a football contest between cricket titans Sachin Tendulkar and Sourav Ganguly. But as Atletico de Kolkata take on Kerala Blasters FC in the return fixture of the Indian Super League on Friday, football fans are looking forward to an entertaining contest between two sides not only in line for semi-final berths but also strong contenders for the ultimate title. Also Read - ISL 2019-20: Mumbai City FC Sign Adam le Fondre on Season-Long Loan

A battle royal of frontrunners in Kerala’s backwaters, one may be tempted to say. Ganguly co-owned Atletico have seen mixed fortunes of late. While they returned to their winning ways against NorthEast United FC after a four-game lean streak, for the first time in the tourney, the Kolkata team has been pushed to the second spot by Chennaiyin FC – albeit by a slender thread.

Both sides are on 16 points from nine games, with identical goal difference of five, but Chennaiyin – co-owned by Bollywood actor Abhishek Bachchan and Indian cricket team captain Mahendra Singh Dhoni – have snatched the pole position by scoring more number of goals (17 against Atletico’s 12). Kerala Blasters, co-promoted by Tendulkar, have zoomed to the third slot following a 1-0 win over Delhi Dynamos Sunday. After nine games, they are four points adrift of Atletico.

An absorbing tussle could be on the cards, with the rivals keen on keeping the winning momentum. Atletico skipper Luis Garcia has seemingly come to the party late, but his world class header that sealed NUFC’s fate showed he is finally having a blast. The Spanish world Cupper has been quite impressive in the last few games along with ATK linkman Jofre Mateu and the Ethiopian marksman Fikru Lemessa Teferra, and the blasters have a tough job at hand to keep them in check.

Kolkata’s defence has been brilliant too, with Josemi and Bengal boy Arnab Mandal forming a great partnership. Baljit Sahni too has fitted in just fine in his new role as a right back. The Kolkata side seems to have learned from its earlier mistakes and could now try to use the flanks to plant in more crosses and passes into the box. However, they have to try and nullify the defensive partnership between Frenchman Cedric Hengbart and the home spun Sandesh Jhingan.

Blasters will rely heavily on the Nigerian Penn Orji and Canadian forward Iain Hume to make a match of it. It was Orji who scored the winner in their last encounter against Delhi Dynamos. The Kerala team also needs custodian Englishman David James at the top of his game, against a side having the dreaded Fikru. Moreover, finishing has been a major problem for the hosts, having scored only half a dozen goals so far.

The first leg match between the two sides had ended 1-1, with Iain Hume nullifying the lead given by Sahni. It remains to be seen whether Garcia steals the show or if Hume’s untiring efforts prove productive for the Blasters.