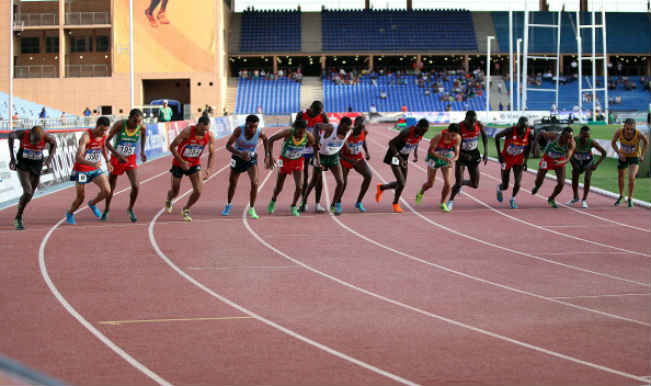 The Federation Cup National Athletics Championships witnessed a sizzling start here as Rajasthan’s Kheta Ram eclipsed the meet mark in the men’s 5,000-metres with a brilliant 13:49.17 that erased Surender Singh’s seven-year-old 13:51.64 record. Also Read - Jawaharlal Nehru Stadium in New Delhi to be Redeveloped at a Cost of 7,850 Crore

On the other hand, in the women’s 5,000m, P. Jaisha defended her title clocking 15:54.21, the fastest time by an Indian woman this year, a tremendous improvement from her last year’s winning mark of 16:39.43. Also Read - I Regret Becoming a Cyclist, All I Now Want is my Old Life Back: Swaran Singh

Incidentally both Kheta Ram and Suresh Kumar finished within the qualifying norm (13:54.11) fixed by Athletics Federation of India (AFI) for selection guidelines for the Asian Games.

National record-holder Tintu Luka intends to keep her best effort in the IAAF Continental Cup at Morocco next month as one of the four Indians on Asia-Pacific team and hence skipped the qualifying rounds in women’s 800m.

Her Kerala teammate and training partner Jessy Joseph could not finish her race. Pramila Yadav from Uttar Pradesh was fastest (2:22.49) qualifier while Sini A. Markose (2:22.81) and inter-state champion Sushma Devi (2:25.49) had won the other two heats.

Long jumper Kumaravel Prem Kumar, who didn’t have an impressive outing in the Lucknow Inter-State Championships and failed to enter the finals, made it this time by leading the qualifiers with a leap of 7.42m.

The women’s 400m hurdles heats witnessed two athletes from Karnataka gearing up for a summit clash in the finals as M. Arpitha clocked a personal best 58.87 seconds to win the first race ahead of much experienced Anu Raghavan of Kerala (59.14) while reigning Asian Games champion Ashwini Akkunji ran a fast 58.45 sec to win the next heat.

Ashwini won the Lucknow title with a time of 57.43 secs and holds a personal best 56.15, clocked in Guangzhou Asiad four years ago.

In the evening session, namesakes Manpreet Kaur (both hail from Punjab) clinched the first two spots in women’s shot put by heaving the 4 kg iron ball to 16.20m and 15.06m respectively while state-mate Navjeet Kaur Dhillon, representing ONGC, filled the podium with a 14.16m toss.

Interestingly the winner Manpreet’s mark was the third best in the Federation Cup history after her predecessors Harbans (16.94m) and Harpreet Kaur’s (16.22m) effort in 1997.