London: KL Rahul has hit a purple patch in the ongoing tour of the UK. After top-scoring in Trent Bridge with 84, the Indian opener followed it up with a brilliant century at the iconic Lord’s Cricket Ground on Thursday during the opening day of the second Test. Following his maverick show, Rahul received praise from all quarters.Also Read - IPL 2021 Today Match Report, MI vs PBKS 2021 Scorecard: Kieron Pollard, Hardik Pandya Guide Mumbai Indians to 6-Wicket Win Over Punjab Kings

But the one that got all the attention was Rahul’s rumoured girlfriend actress, Athiya Shetty reacting. The Bollywood diva posted a story on her Instagram handle with a heart emoji. Her father and Bollywood actor Suniel Shetty also reacted to the knock. He wrote, “100 at the Mecca of cricket! Well played baba.” Also Read - IPL 2021: Rohit Sharma Hails Hardik Pandya, Reacts on Dropping of Ishan Kishan After MI Beat PBKS in Abu Dhabi 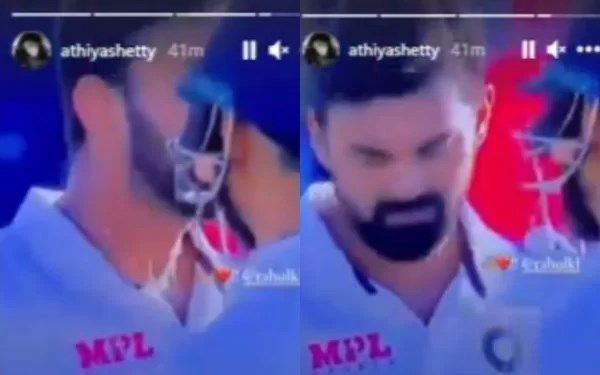 Rahul was not India’s first-choice opener for the Tests against England. But after Shubman Gill and Mayank Agarwal picked up injuries – the Bengaluru-born was picked to slot in at the top with Rohit Sharma. With his ton, he became the first Indian after Ajinkya Rahane and 10th overall to earn a place on the prestigious Lord’s Honours Boards at the home of cricket. Also Read - MI vs PBKS MATCH HIGHLIGHTS IPL 2021 Today Cricket Updates: Hardik Pandya-Kieron Pollard Power Mumbai Indians to 6-Wicket Win vs Punjab Kings

Rahul also became only the third Indian opener to score a Test century at the Lord’s. Vinoo Mankad (1952) and Ravi Shastri (1990) are the other two Indian openers who reached the triple-digit mark at the iconic ground.