Kolkata Knight Riders vs Perth Scorchers, CLT20 2014: Will Mitchell Marsh have an answer for Sunil Narine? 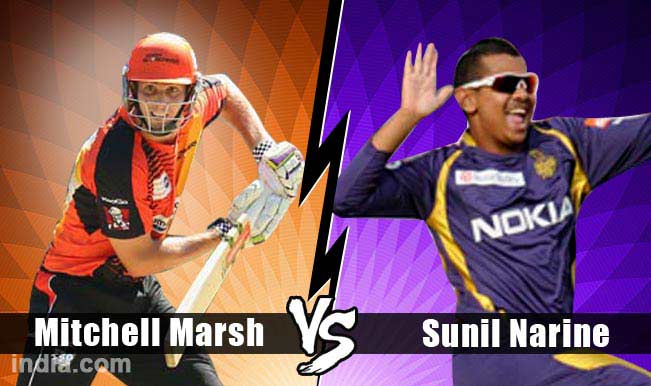 Kolkata Knight Riders will take on the Perth Scorchers in their third game of the tournament, looking for a spot in the semis with another victory. Scorchers on the other hand will look to win their second game and put themselves in a better position. Here we discuss some of the major battles from the game, battles that can decide the faith of the game. Also Read - IPL Team Preview: Kolkata Knight Riders Look Balanced, Have to Arrest Inconsistency

Gautam Gambhir opens the batting and he is bound to face Nathan Coulter-Nile early on. The Australian fast bowler is known for getting those crucial early wickets while the 32-year-old opener has been one of the Knight Riders’ stellar performers in the last four 4 years. This mouth-watering battle will certainly set the tone of this match.

Kuldeep Yadav made his debut appearance for the Knight Riders against Lahore Lions and impressed the onlookers with his variations and amazing ability to spin the ball. Voges on the other hand is a good player of spin and has handled pressure really well. This battle could take place in the middle of the innings because it will dictate the path this game will flow.

Marsh caught everyone’s attention when he finished helped the Scorchers seal a six-wicket victory with two consecutive sixes in the final two deliveries of the innings. And once again the onus will be on him to ensure Justin Langer’s side secure back-to-back victories. But the 22-year-old Australian has a daunting bowler to face in Sunil Narine. The West Indies spinner has shown his prowess with the ball by managing six maiden overs out of eight bowled in the tournament so far.