Kraigg Brathwaite became the third-youngest West Indian to compile a Test double-century in leading the home side to a dominating 407 for three at the close of a rain-shortened second day of the first Test against Bangladesh at the Arnos Vale Stadium in St Vincent on Saturday. 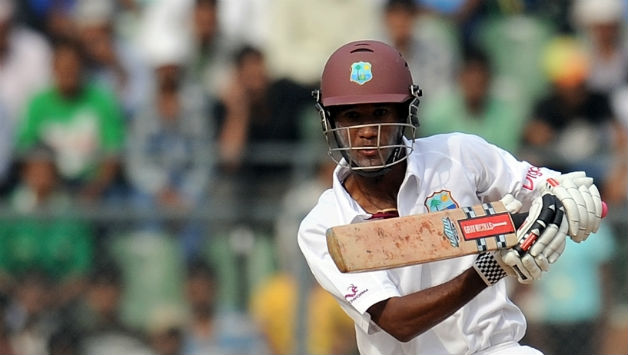 KINGSTOWN, September 6: Kraigg Brathwaite became the third-youngest West Indian to compile a Test double-century in leading the home side to a dominating 407 for three at the close of a rain-shortened second day of the first Test against Bangladesh at the Arnos Vale Stadium in St Vincent on Saturday. Also Read - WI vs AUS 2021: Alex Carey to Captain Australia After Aaron Finch Misses Out Due to Injury

On a day when a complete washout was in prospect after torrential overnight and morning showers left the ground waterlogged, Brathwaite took full advantage of the improved weather in the second half of the day to finish unbeaten on 205 after more than nine hours at the crease. Also Read - Chris Gayle Creates History, Becomes First Batsman to Score 14000 T20 Runs

Noted for his dour, defensive style, the 21-year-old opening batsman benefited from the guidance of a player with enormous experience but noted for his manner of batsmanship. In his 40th year and 21st as an international cricketer, Shivnarine Chanderpaul joined Brathwaite in a fourth-wicket partnership that has so far realised 146 runs, his contribution being an unbeaten 51.

With the weather remaining unsettled in St Vincent at the very heart of the rainy season in the Caribbean, it remains to be seen if the West Indies, who progressed at snail’s pace through the afternoon, will push on for quick runs on the third morning or declare the innings closed and seek to put the Bangladeshi batsmen under pressure on a pitch that remains ideal for batting.

Brathwaite’s only real moments of anxiety came when one run short of the double-century but he eventually swung a delivery from off-spinner Mahmudullah to the square-leg boundary to reach the coveted landmark with his 14th four just before the end of the day.

Only West Indian batting legends George Headley and Sir Garfield Sobers were younger when they scored their first double-centuries in Test cricket. Chanderpaul survived a testing early period when play eventually started as fast-medium bowler Rubel Hossain caused him no end of worry.

Operating with the second new ball, Rubel came very close to trapping Chanderpaul LBW and then had a vociferous appeal for a catch at the wicket turned down by presiding umpire Marais Erasmus. A review of the decision, as requested by Bangladesh captain Mushfiqur Rahim, did not provide enough evidence to result in an overturning of the on-field verdict.

For Mushfiqur and the rest of his team, it has been a tiring day-and-a-half in the field and already it appears their only aim in this Test match is to bat for as long as possible to ensure a draw, whenever the West Indies first innings comes to an end.