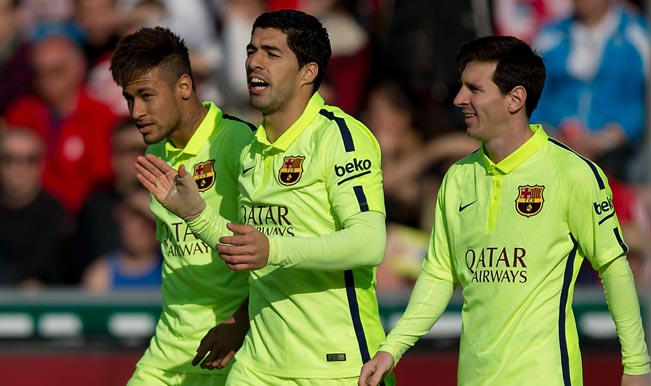 Suarez scored his third goal of the week before setting up Messi as Barcelona kept the pressure on Real Madrid at the top of the Spanish league standings. The Uruguayan, who scored twice in a 2-1 victory at Manchester City on Tuesday, arguably had his best game since joining Barcelona. He played a part in Barcelona’s first goal when Ivan Rakitic finished off his rebound in the 25th. Also Read - Lionel Messi: Barcelona Star Looking Lonely During Training Will Break Hearts of Fans | WATCH VIDEO

He then worked a one-two combination with Rakitic to double the lead in the 48th. Five minutes later, Granada’s Fran Rico converted a penalty, but Rakitic played Suarez through for him to generously pass to Messi in the 70th. Suarez’s goal was his 10th in 24 appearances, after he started the season late while completing a four-month ban for biting Italy defender Giorgio Chiellini at the World Cup.

“He has been playing at a very high level. Now, with the goals he is scoring, his hard work is being more widely recognized, but for us he has been doing a very special and interesting job,” Barcelona coach Luis Enrique said of Suarez.

Messi, who could have had another couple of goals if not for Oier Olazabal’s goalkeeping, took his league tally to 27 on the season. Madrid’s Cristiano Ronaldo leads the competition with 29. Barcelona pulled to within one point of Madrid before the pacesetter hosts Villarreal on Sunday.

Bueno, a Madrid youth product who played for Derby County in England’s second tier in 2010, started his performance by cancelling out Victor Casadesus’ opener with a header. The attacking midfielder then put in a poor clearance by goalkeeper Diego Marino with his right foot, before slotting in a third goal with his left, and polishing off his own initial shot again with his right boot. Kalu Uche scored late for Levante. No Rayo player had ever scored four goals in one game. In 1995, Deportivo La Coruna’s Bebeto scored five goals in a 5-0 thrashing of Almeria, the last four coming in a seven-minute span.

“It felt like every ball I touched was going in,” Bueno said. Barcelona will face Bueno’s Rayo in the next round, and will do so without Neymar after he picked up a fifth yellow card. But first, Barcelona visits Villarreal on Wednesday looking to book its place in the final of the Copa del Rey, holding a 3-1 advantage heading into the second leg of their semifinal.

Granada, which was left in second-to-last place just ahead of Levante in the relegation zone, held its own in the first half at Los Carmenes Stadium. Barcelona, however, got a key save from Claudio Bravo to stave Javi Marquez’s goal-bound strike shortly before halftime, and Rakitic and Suarez provided enough firepower to secure the three points. Messi and Neymar were held in check by Granada’s defense until late, leaving Suarez to lead the attack.