Valencia sealed their place in next season's Champions League as Eibar and Almeria were relegated on a dramatic final day of the La Liga season. 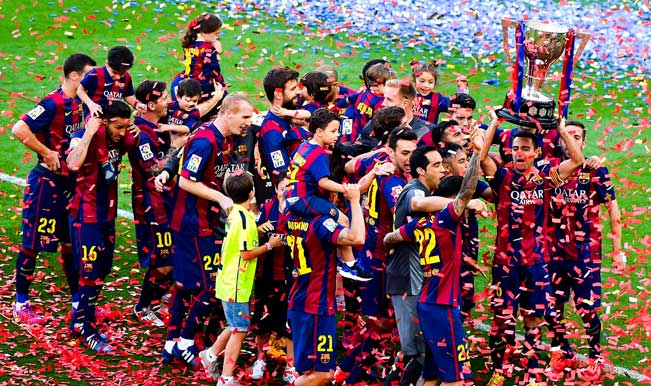 Madrid, May 24: Valencia sealed their place in next season’s Champions League as Eibar and Almeria were relegated on a dramatic final day of the La Liga season. Deportivo La Coruna came back from 2-0 down away at champions Barcelona to spoil a homage to Xavi Hernandez at the Camp Nou and stay up with a 2-2 draw along with Granada who held Atletico Madrid 0-0 at home on Saturday. Also Read - Lionel Messi-Marc Ter Stegen Clash After Barcelona Beat Real Sociedad in Spanish Super Cup: Reports

That point was enough to ensure Atletico go straight into next season’s Champions League group stages in third, whilst Valencia twice came from behind to win 3-2 at Almeria and secure fourth. Eibar’s remarkable first season in the top flight didn’t have fairy tale ending as they were relegated despite just a second win in 20 matches 3-0 at home to Cordoba due to their inferior head-to-head record with Deportivo and Granada. Also Read - Cristiano Ronaldo, Lionel Messi Could Have Played Together at Barcelona: Former Real Madrid President Makes Shocking Revelation Ahead of Transfer Season

Athletic Bilbao also secured European football for next season in the Europa League thanks to a 4-0 thrashing of Villarreal. Xavi was making his 505th and final Liga appearance after announcing he will join Al Sadd at the end of the season after Barca face Athletic Bilbao and Juventus in the Copa del Rey and Champions League finals respectively.

“I am the happiest man in the world today and for the 17 season I have been here. As the coach has said this hasn’t finished. We want two more titles and we want to be here with you all again in Barcelona on June 7 (after the Champions League final),” he told the crowd after fighting back tears.

Barca looked set to save Eibar for much of the day Lionel Messi headed home Rafinha’s cross to give the hosts the lead after just five minutes. The Catalans dominated for large swaths of the game and looked to have sealed the Galicians fate when Neymar unselfishly squared for Messi to make it 2-0 on the hour mark.

However, Lucas Perez gave Deportivo hope with a stunning strike into the top corner seven minutes later and Salomao struck 14 minutes from time to cap a remarkable fightback. Granada also secured their top flight status for a fifth consecutive season as they and Atletico played out a bore 0-0 draw that suited both parties.

Valencia’s hopes of a return to the Champions League were given an almighty fright by Almeria as they twice went in front in the first-half. Thomas Partey’s free-kick sneaked past Diego Alves at his near post after nine minutes, but, as so often this season, Nicolas Otamendi came to Valencia’s rescue with a powerful header to equalise.

Jonathan Soriano put Almeria back in front and then missed a huge chance to make it 3-1 moments later. The visitors responded once more before half-time as Sofiane Feghouli tapped home from close range and, with both teams chasing the winner, Paco Alcacer coolly slotted past Ruben Martinez 11 minutes from time.

Valencia’s victory rendered Sevilla’s 3-2 win at Malaga meaningless as they finished a point back in fifth. However, the Andalusians can still qualify for next season’s Champions League should they retain the Europa League against Dnipro Dnipropetrovsk on Wednesday.