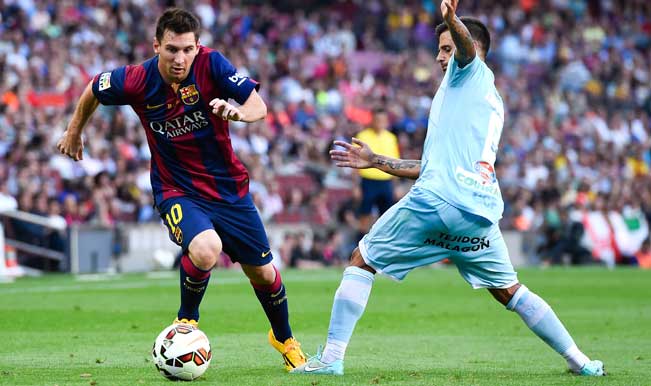 Madrid, Sep 28: Four-time World Player of the Year Lionel Messi said he could never have envisaged scoring 400 goals in his career after passing that landmark in Barcelona’s 6-0 rout over Granada. The Argentine scored twice yesterday and took his tally of assists for the season to eight with two more as Neymar bagged a hat-trick to take Barca back to the top of the table. Messi’s two goals took him to 359 goals for Barca allied to his 42 at international level in 525 games for club and country. Also Read - Luis Suarez Responds to Barcelona Captain Lionel Messi's Farewell Message

“I never imagined I could achieve anything like this in my career. Thanks for all the congratulations on scoring 400 goals with FC Barcelona and the Argentinian National Team. I’ll continue working hard to reach more targets,” he said via his official Facebook page. Messi is the only player to have started all seven games under new Barca boss Luis Enrique as the 44-year-old has been otherwise keen to rotate his squad. Also Read - Lionel Messi, Cristiano Ronaldo Miss Out on UEFA Men's Player of the Year Award; Kevin De Bruyne, Robert Lewandowski and Manuel Neuer Nominated

But Enrique admitted even he is enjoying watching the 27-year-old too much to hand him a break.

“I don’t think if we added together the goals we have scored on the playground it would reach 400. Messi is someone who has been touched by a magic wand and he is desperate to enjoy playing football. I prefer to see him on the pitch until the last minute to press and participate in our collective play. The temptation is there, it could happen at any point in the season, but his habitat is on the field. He is very intelligent and knows how to manage his efforts and he is one of the players who presses the most. I am confident his physical ability is up to that of being the number one,” he said in his post-match press conference.

Next up for Barca is their biggest test of the season so far as they travel to face French champions Paris Saint-Germain in the Champions League. However, Enrique insisted he is confident that whatever team he selects they will be capable of leaving the Parc des Princes with three points.

“At the moment I don’t see any player who isn’t capable of puting in a good performance in Paris and that for me is an advantage. We are moving forward with everyone, the team is showing reliability in important aspects of the team independent of who plays,” the 44-year-old explained. The root of that confidence comes from not only Barca’s supreme attacking resources in Messi and Neymar, but also a stellar defensive record as they have yet to concede a goal in seven games this season.

“To be able to attack well you need a good attack, to be well organised and, when the opposition have the ball, the first objective is that the don’t progress. It is very important for us to be efficient with and without the ball. To be efficient in all phases. The players are showing their commitment to being strong defensively,” added Enrique.