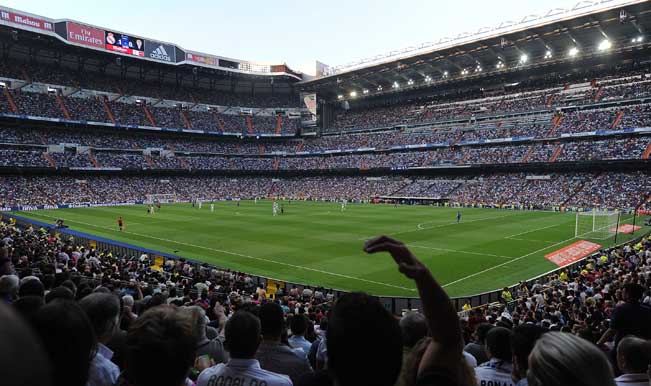 Madrid, Sep 20: Spanish football club Real Madrid have published accounts for the 2013-14 season, which saw their debt rise to a total of 602 million euros ($773 million). The debt has risen by 61 million euros from the total debt of 541 million euros which was posted for the 2012-13 campaign and includes all of the money that the club owes, be it to banks, providers, other clubs and the public administration, reports Xinhua. Also Read - Lionel Messi, Cristiano Ronaldo Miss Out on UEFA Men's Player of the Year Award; Kevin De Bruyne, Robert Lewandowski and Manuel Neuer Nominated

The club owes 75 million euros to banks, while 361 million euros of the debt is short-term and 241 million is long-term, which is a worrying factor for the club, given that this summer saw Real Madrid sell some important players, among them Angel Di Maria, Xabi Alonso and young striker, Alvaro Morata. Also Read - Cristiano Ronaldo to Miss Serie A Games For Juventus, Hints Coach Andrea Pirlo

The club’s income only rose by five percent during the 2013-14 season, despite a season which saw Real Madrid reach the final and win the Champions League and the Copa del Rey.  That shows that perhaps the club is reaching a limit in the number of shirts they are able to sell, despite the arrival of Gareth Bale and could explain the signing of Colombian, James Rodriguez in an attempt to open up the Latin American market.

Real Madrid club president, Florentino Perez will Sunday explain the accounts at the club’s General Assembly and will no doubt have to face some difficult questions over why the economic reality at the club, differs from the vision (which includes a 500 million euro plan to re-develop the Santiago Bernabeu Stadium) he has consistently offered.

Meanwhile, if the debt is not controlled, rumours of Cristiano Ronaldo returning to Manchester United, or of cutbacks to the club’s youth system, will only continue to grow.