Sania and Martina won two break points in each set to their opponents - one which was enough to settle the match in their favour. 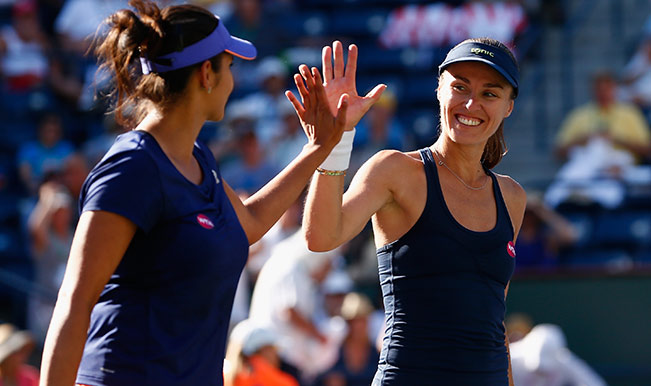 Top seeds Sania and Martina Hingis of Switzerland eased past local pair of Stephanie Foretz and Amandine Hesse 6-3, 6-4 on Court 3 of Stade Roland Garros. Sania and Martina won two break points in each set to their opponents – one which was enough to settle the match in their favour. Also Read - French Open 2020 Final: Chris Evert Calls Out Novak Djokovic For 'Rivalry With Rafael Nadal Biggest in Sport' Comment

After sharing the first two sets, the third and final set had a nail biting finish with Bopanna and Mergea holding their nerves to take the set 7-5 and eventually the match. They next face Netherland’s Jean-Julien Rojer and Romania’s Horia Tecau in the third round.

Paes and Nestor broke and were broken once in the first set which went into the tie-break where the experienced 10th seeds had it easy, winning it 7-3. They were broken once in the second set but broke Begemann and Knowle twice more to clinch the second set and the match. Next up, the Indo-Canadian pair will take on Italian sixth seeds Simone Bolelli and Fabio Fognini for a place in the quarterfinals.

Earlier on Thursday, Paes, partnering Martina, entered the second round while his compatriot Rohan Bopanna, with Kazakh Yaroslava Shvedova, crashed out from the first round of mixed doubles.

It was an easy task for Paes and Hingis as they had full control right from the start, winning 88 percent of first serve points and 62 percent of second serve points. They broke their opponents thrice out of seven opportunities to win 53 of the 89 points played.

Earlier, Bopanna-Shvedova fought hard but their efforts went in vain as they were beaten 6-7(5), 6-0, 3-10 by Czech-Polish combine of Lucie Hradecka and Marcin Matkowski.

The first set was a tight contest as only a tie-breaker, which went in favour of Hradecka and Matkowski, could settle it. However, the Indo-Kazakh pair came back strongly to win all six games of the second set and push the match in to the decider. But they failed to make an impact in the super tie-break, losing 3-10.