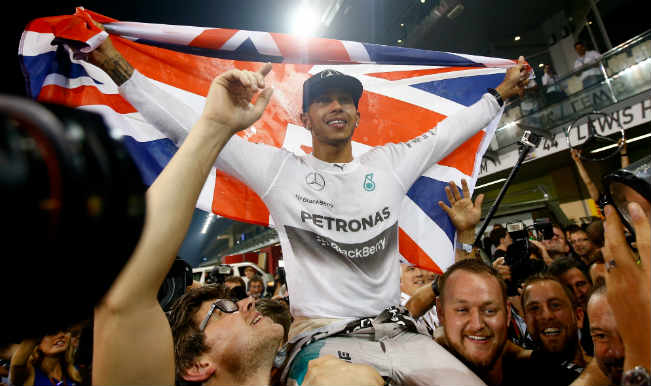 London, Nov 24: Formula One champion Lewis Hamilton has said that the feeling he has now after winning the 2014 championship is way, way past the feeling he had in 2008, which he claims was a great year in his life. Hamilton clinched his second drivers’ World Championship with a comfortable victory in the season-ending Abu Dhabi Grand Prix , becoming only the fourth Briton to win two world titles, having won the first in 2008. Also Read - F1 Spanish GP 2020: Lewis Hamilton Extends Championship Lead With Dominant Win, Max Verstappen Beats Valtteri Bottas to Claim Second Spot

Hamilton, second in qualifying, took the lead at the start and controlled the race, as Mercedes teammate and title rival Nico Rosberg suffered car trouble and finished 14th, The BBC reported. Hamilton said that this was the greatest day of his life, adding that 2008 was a great year in his life, but the feeling he has now is way, way past that. He said that it is the greatest feeling ever. Also Read - Dubai Crown Prince Stops Using His Mercedes After Birds Build Nest on it As He Didn't Want to Disturb Them | Watch

Hamilton moves level with Britons Jim Clark and Graham Hill on two titles, and is one behind Sir Jackie Stewart. He joins a number of other drivers on two titles, including his great contemporary rival Fernando Alonso. Michael Schumacher is the all-time record holder with seven, while the most successful current driver is Sebastian Vettel on four.

Rosberg, who started on pole, was left struggling by the failure of his hybrid system. With two laps to go, he was told to retire by his engineers at Mercedes but said that he would like to go to the end. As Hamilton crossed the line, Prince Harry, attending the race, took to the team radio to said that he did well for not making the British public sweat. The Prince added that Hamilton is an absolute legend.

Hamilton stood on his car to celebrate after he returned to the pits and then went over to embrace girlfriend Nicole Scherzinger and his family, who had flown in for the race day to support him. The Englishman’s win was his 11th of the season, compared to Rosberg’s five, and he finished 67 points clear at the top of the title standings. It was also the 33rd win of Hamilton’s career, moving him clear of his great rival Fernando Alonso into fifth in the all-time list, the report added.