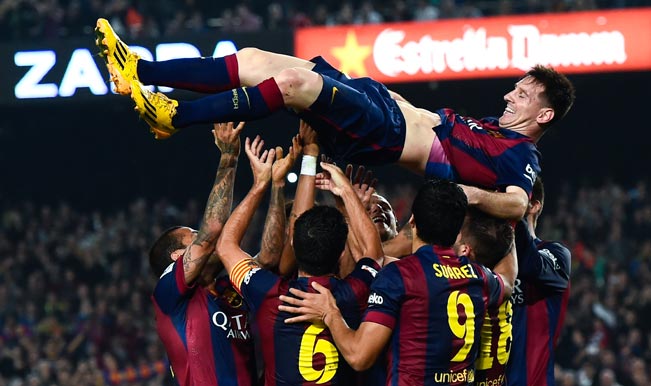 Madrid, Nov 24: Lionel Messi could make Champions League history Tuesday to add to the record he set in the Spanish La Liga over the weekend. Messi overtook the 50-year-old record of Telmo Zarra as the highest goal-scorer in the history of the league Saturday, when he netted his 251st, 252nd and 253rd league goals. Also Read - UEFA Champions League Draw: It's Messi vs Ronaldo Once Again as Barcelona Gets Drawn With Juventus in Group G

Barcelona play in Cyprus away to APOEL Nicosia having already assured their place in the knockout stage of the UEFA Champions League (UCL), but needing a win in order to have a chance of beating Paris Saint Germain to the top spot in the group, which will assure a theoretically easier draw in the last 16. Messi travels after netting twice in his last European game, away to Ajax to take his total to 71 goals in the competition, level with the all-time UCL record goal-scorer, the former Real Madrid striker, Raul Gonzalez. Also Read - Cristiano Ronaldo or Lionel Messi? Most Admired Sportsman in The World Revealed

Another goal for Messi Tuesday would make him not only the all-time record scorer in Spain, but also in Europe, where he is currently battling it out with Real Madrid’s Cristiano Ronaldo, who has 70 goals, for supremacy. Barcelona showed a marked improvement in form in their 5-1 thrashing of Sevilla Saturday, but coach Luis Enrique will make changes given his side have a tough domestic game away to Valencia at the weekend.

Ter Stegen will return in goal and players such as Marc Bartra, Adriano, Javier Mascherano and Pedro Rodriguez could all get their chance. Meanwhile Andres Iniesta is still recovering from a thigh injury and defender Thomas Vermaelen, who has yet to make his debut after joining this summer, is still sidelined after suffering a relapse of his hamstring problems.

Tuesday also sees Athletic Club Bilbao, who have no chance of making the last 16 play away to Shakhtar Donetsk looking for points that will at least give the Basque side a chance of finishing third in their group, helping them earn a place in the last 32 of the Europa League.