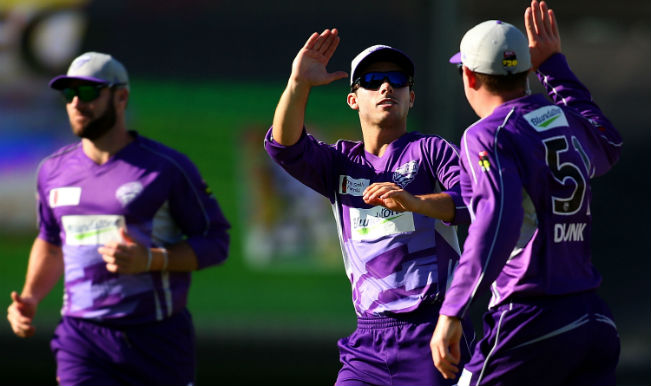 Catch the live cricket score and ball by ball commentary as Hobart Hurricanes take on Barbados Tridents (BT) in Group B clash of Champions League T20 (CLT20) 2014. The Australian side have the advantage going into the match as they are touted as the favourites to win the Group B contest against the Barbados Tridents who are yet to win a match at the Champions League Twenty20 tournament. Also Read - BAR vs SLZ Dream11 Team Prediction CPL T20 2020: Captain, Fantasy Cricket Tips For Today's Barbados Tridents vs St Lucia Zouks Match at Queen’s Park Oval, Trinidad 7:30 PM IST August 30

The Australian team has won two of the three matches till now and a massive victory against the Northern Knights in their previous game, they will be very confident to face the winless Barbados team with a hint of grief from their only defeat in the tournament to Kings XI Punjab coming at Mohali over a week back. Also Read - SKN vs BAR Dream11 Team Prediction CPL T20 2020: Captain, Fantasy Cricket Tips For Today's St Kitts and Nevis Patriots vs Barbados Tridents Match at Queen’s Park Oval, Trinidad 7:30 PM IST August 25

Catch the live cricket score and ball by ball commentary of Barbados Tridents vs Hobart hurricanes CLT20 2014 Group B match.