Catch the Live Cricket Score Updates of India vs Australia, Second Test - Day 2 at the Gabba in Brisbane on Thursday here 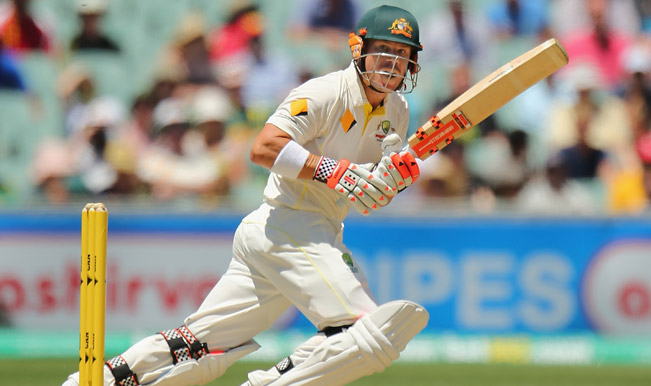 Australia 221 for 4 Steve Smith 65* Mitchell Marsh 7* Australia have finished Day Two on 221 for four, trailing India by 187 runs. It was a good day of cricket and a balanced result for both the sides after India were bowled out in the first session of play. The first and teh last session belonged to Australia, while the visitors had a slight edge in the post-lunch session. Also Read - India Tour of Australia 2020-21: Devdutt Padikkal to Shivam Mavi, Five IPL Stars Who Could Make Virat Kohli-Led 32-Man Team

Australia 208 for 4 Steve Smith 65* India finally strike in the third session. After being dropped by Ajinkya Rahane earlier, Umesh Yadav manages to get rid of the left-hander. He bowled a delivery leaving the batsman and Shaun Marsh just poked at it. The ball flew over the slip fielder and Ravichandran Ashwin took a brilliant catch at second slips. Shaun Marsh c Ashwin b Yadav 32 (70b)

Australia 205 for 3 Steve Smith 57* Shaun Marsh 32* Australia have done well to cross the 200-run mark without any further damage. Shaun Marsh and Steve Smith have looked at complete ease against the Indian bowlers in the last session of the day. They have played ball to the merit. They counter-attacked Ravichandran Ashwin to force MS Dhoni to change his plans. Meanwhile, Steve Smith has brought up his 10th Test half-century and continued his good form in the series.

Australia 182 for 3 Steve Smith 39* Shaun Marsh 27* Steve Smith and Shaun Marsh are moving along well, scoring quickly. A lot of runs are still coming off edges. It is surprising why MS Dhoni is not attacking batsmen with enough close in fielders. They have already put on a half-century stand for the fourth wicket. This is a crucial partnership for Australia as another wicket would mean that Brad Haddin will have to come out to bat followed by the tail. Mitchell Marsh is already out due to a hamstring injury.

Australia 148 for 3 Steve Smith 22* Shaun Marsh 11* Steve Smith and Shaun Marsh have consolidated well following the fall of two quick wickets before Tea. The duo is moving along slow and steady. India had seized the momentum before going into tea after Shane Watson and Chris Rogers had put up a good stand for the second wicket partnership. Nonetheless, the two new batsmen have done well to bring the match into balance yet again.

Steven Smith 22* now has the highest by an Aussie capt on debut inns since Greg Chappell made 123 at Brisbane – 39 years ago! #AusvInd — Mohandas Menon (@mohanstatsman) December 18, 2014

Australia 121 for 3 Steve Smith 6* Umesh Yadav has struck in the last over before tea. He manages to get an edge off Chris Rogers’ bat. India have had a successful session even as they conceded over 100 runs in the session. They bagged three crucial wickets. Chris Rogers scored a good half-century. His place in the side has been under threat by Ed Cowan who has been scoring heavily in the domestic circuit. His form too hasn’t been great. Chris Rogers c †Dhoni b Yadav 55 (79b)

Australia 98 for 2 Chris Rogers 39* Ravichandran Ashwin strikes in his third over. Shane Watson looking to clear the in-field fails to mistime the ball and ended up giving a tough chance to Shikhar Dhawan at mid-on. Dhawan took a spectacular diving catch to dismiss Shane Watson. Shane Watson c Dhawan b Ashwin 25 (29b)

Australia 92 for 1 Chris Rogers 35* Shane Watson 24* Ravichandran Ashwin has been brought into the attack. The duo of Chris Rogers and Shane Watson have successfully waded off the initial troubles from the pitch. It will be interesting to if Ashwin can exploit the rough caused by the footmarks of Mitchell Johnson and Mitchell Starc. He is operating from round the wicket againstr left-handed Chris Rogers.

Australia 66 for 1 Chris Rogers 23* Shane Watson 10* Indian pacers – Umesh Yadav, Varun Aaron and Ishant Sharma are generating good pace, keeping the batsmen on the backfoot and consistently probing outside the off-stump. They are consistently clocking over 140 kmph. The off-side is packed with three slip fielders and two gully. Even as the scoring rate is good, runs are coming in edges.

Australia 47 for 1 Chris Rogers 16* India strike early as Umesh Yadav dismisses the dangerous David Warner. The left-hander was yet again looking to take India out of the game with some power-hitting. However, the opener mistimed a pull shot and lost his wicket.  David Warner c Ashwin b Yadav 29 (28b). Shane Watson has come out to bat following the dismissal of David Warner. Watson hasn’t had a great time with the bat lately.

Australia 27 for 0 David Warner 21* Chris Rogers 4* David Warner and Chris Rogers have come out to open the innings for Australia. The opening duo has started off on a good note fo Australia. Like always, David Warner has taken an aggressive start. Meanwhile, Mahendra Singh Dhoni too has been creative with his field placements. But there is little that is bothering Warner as of now.

India 407 for 9 Umesh Yadav 7* Ishant Sharma 0* It’s going downhill for the Indians as they lose their ninth wicket. After being dropped by Brad Haddin earlier in the over, Varun Aaron gets a bat-pad to short leg, where Marnus Labuschnage takes a brilliant diving catch. Ishant Sharma is the last man coming out to bat. Varun Aaron c sub b Lyon 4 (11b)

India 394 for 8 Umesh Yadav 0* Varun Aaron 0* Five wicket haul for Josh Hazlewood on debut! MS dhoni was looking good to take the scoring rate up. And yet again, it is Brad Haddin who takes the catch. MS Dhoni’s stay at the crease comes to an end and with it possibly India’s last resistance in the first innings. Josh Hazlewood becomes the 133rd bowler to take a five-wicket haul on debut. MS Dhoni c †Haddin b Hazlewood 33 (53b). Varun Aaron and Umesh Yadav are at the crease to take India’s charge ahead.

India 385 for 7 MS Dhoni 30* Umesh Yadav 0* Josh Hazlewood is having a good debut match. he takes the second wicket of the day and the fourth of the innings. He manages to dismiss Ravichandran Ashwin, caught by Shane Watson. With this, the break the last known batting partnership. The likes of Ishant Sharma now will have to provide good support for the skipper to score runs.  Ravichandran Ashwin c Watson b Hazlewood 35 (41b)

India 373 for 6 MS Dhoni 22* Ravichandran Ashwin 25* There is bit of venom in spunk in the way Mitchell Starc has been bowling today. He is bowling a tight line, allowing little room for the batsmen to free their arms. He is also making good use of the Gabba wicket to generate steep bounce. However, Ravichandran Ashwin doesn’t look too troubled.

India 348 for 6 MS Dhoni 17* Ravichandran Ashwin 7* It is important for the duo of MS Dhoni and Ravichandran Ashwin to stick along and stitch a bigger partnership. They are looking good in the middle against the pace and the movement. While Djhoni is a bit awkward in his shot selsction, Ashwin is leaving the ball well. Nonetheless, the captain is hitting some sparkling drives. The tail will be exposed if India loses another wicket soon. All the good work of Day One will be lost.

India 328 for 6 MS Dhoni 5* Shane Watson strikes for Australia! The home side bowlers have got their line right. Watson teases Rohit Sharma with a delivery outside off-stump. The edge flies towards the right of Steve Smith as the captain takes a fantastic diving catch at third slip. Australian bowlers have taken full advantage of the morning conditions and the new ball. Rohit Sharma c Smith b Watson 32 (55b)

India 321 for 5 Rohit Sharma 30* MS Dhoni 0* Josh Hazlewood strikes again. His third wicket in the innings. The right-arm pacer comes back well after getting hit for a boundary as he pitches the ball just full of good length and gets a good away swinger gong to get the outside edge of Ajinkya Rahane’s bat. Ajinkya Rahane c †Haddin b Hazlewood 81 (132b). MS Dhoni has come out to bat following the dismissal of Ajinkya Rahane.

Hello and welcome to the live cricket score updates of Day of the second Test match between India and Australia at the Gabba in Brisbane on Thursday. India is set to resume their first innings at 311 for four with Rohit Sharma and Ajinkya Rahane unbeaten at the crease. Australia lead the four-match Border-Gavaskar Trophy 1-0 after they won the first Test at Adelaide. Read Day 1 Report of the Second Test here

India skipper Mahendra Singh Dhoni won the toss and elected to bat first on a pitch that had assistance for the pacers. Dhoni returned to the side after recovering from his injury. He replaced Wriddhiman Saha, who kept wickets in the first match. Ravichandran Ashwin and Umesh Yadav too came into th side at the expense of Karn Sharma and Mohammed Shami.

Australia too made three changes to the line-up that won the first Test. Michael Clarke was ruled out of the series due to a hamstring injury he sustained at Adelaide. Shaun Marsh got a look in. Ryan Harris and Peter Siddle were also rested. Mitchell Starc and debutante Josh Hazlewood made a cut to the Playing XI. Steve Smith led Australia for the first time.