Liverpool slip to third but are still very much in contention for the group runners-up spot. 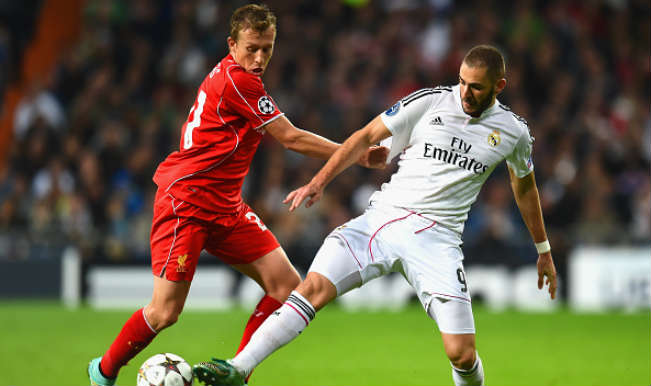 Liverpool, Oct 5: Real Madrid consolidated their position as runaway leaders of Champions League Group B, with a 1-0 win over Liverpool at the Bernabeu on Tuesday. A much changed Liverpool side fought hard, but ultimately came up short against their opponents with Karim Benzema scoring the solitary goal in the 27th minute. The result ensures that the Spaniards will progress to the next round of the tournament as they lead the group with the maximum available 12 points from their four games. Also Read - La Liga: Late Vinicius Strike Gives Real Madrid Win Over Sevilla

Liverpool slip to third but are still very much in contention for the group runners-up spot. The match was also memorable for Madrid goalkeeper Iker Casillas as he became the most capped Champions League player of all time with 144 appearances in Europe`s premier club competition. Also Read - Champions League: Manchester City, PSG, Real Madrid, Inter Milan, and Sporting Lisbon Advance to Last 16

Brendan Rodgers admits Liverpool still have plenty of room for improvement despite recording a much-needed 2-1 win over West Bromwich Albion. Rodgers’ side, beaten 1-0 by Basel in the Champions League in midweek, secured a first win in four Premier League games with a tense victory at Anfield on Saturday.

It was enough to move the Reds, who finished second in the Premier League last season, into the top half of the table, with 10 points from their seven matches, but the Liverpool manager knows his team remain short of peak form. Rodgers made a host of signings over the close-season in an attempt to replace star striker Luis Suarez, who joined Barcelona, and bolster his squad for a sustained challenge in the Premier League and Champions League.

So far the results of his overhaul have been underwhelming, but Rodgers is hopeful performances will improve if the club’s injury problems have cleared by the end of the forthcoming international break. “Performance wise we’ve still got a way to go,” he said. “The speed and movement of our game, the intensity is still developing.

“But I’d rather have that now and do what we’ve done in the last two seasons and get better and better as the season goes on. While you’re searching for that it’s important you find a way to win. “The players have got remarkable character, there are a lot of young players here and new players coming finding out what it’s like to be at a big club.

“It was a very important win for us and we’ll hopefully come back after the international break and be back to what we were (for the 3-0 win) at Tottenham (in August). “A full squad to pick from gives me the chance to look at different ideas if I need to and hopefully we can go on a run.”