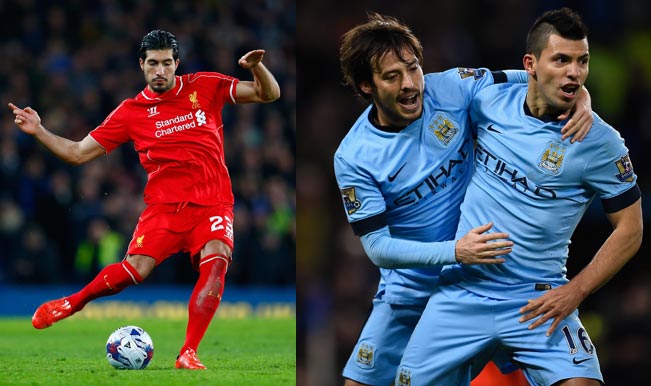 Full-Time: Liverpool have won it! Manchester City’s woeful run at Anfield continues as Jordan Henderson and Philippe Coutinho give Liverpool a 2-1 win. The Reds’ move to fifth place in the league table, level on points with Arsenal, who play Everton in a few moments. Thank you for tuning in. Catch y’all for the live update of the Capital One Cup final at 9:30 where Chelsea take on Tottenham Hotspur. It’s goodbye for now! Also Read - TOT vs MCI Dream11 Team Tips And Predictions, Premier League: Football Prediction Tips For Today’s Tottenham vs Manchester City on November 21 Saturday

90′: Attempt – Off-target- Manchester City: Yaya Toure powers his way inside the Liverpool box and manages to lay the ball to Silva, who fires it wide. There will be three additional minutes at Anfield.

88′: Attempt – Off-target – Liverpool: How do Liverpool not have a three-goal lead here? Henderson once again puts Yaya Toure under pressure, who mis-hits his backpass and gives it away to Sturridge. But the substitute is unable to make the Ivorian pay by sending his shot well wide off Hart’s far post.

85′: Attempt – Liverpool: It’s all Liverpool at the moment. Henderson robs Yaya Toure and Sterling finds Coutinho unmarked down the left. But the Brazilian’s shot is deflected over the crossbar by  Mangala.

79′: Attempt – Off-target – Manchester City: Liverpool fail to clear Silva’s overhead pass towards Bony and Aguero wriggles inside the box and fires wide. Liverpool are let off the hook here!

75′: GOAL – Liverpool: LIVERPOOL are back in front! Coutinho, in an almost identical style to that of Henderson’s goal, receives the ball from Sterling and curls it well beyond Hart’s reach. Liverpool 2-1 Manchester City.

74′: Lallana acrobatically tries to meet Markovic’s cross but cannot guide his shot towards goal. Pressure increasing for both sides and Liverpool are preparing to bring on Daniel Sturridge.

54′: OFFSIDE – Liverpool: Lallana can’t catch a break! Liverpool have a free-kick outside the box and Allen’s delivery finds Skrtel’s head. The Slovakian heads the ball towards Lallana, who puts the ball past Hart. But the flag is already up as Skrtel was marginally offside when the free-kick was delivered.

52′: Attempt – Off-target – Liverpool: Another chance goes begging for the home side! Liverpool link up well and Lallana tries to tee up his team-mate with a perfect cross but Sterling – under pressure from Zabaleta – shoots wide.

46′: Attempt – Off-target – Manchester City: Man City start the half brightly and nearly take the lead! Zabaleta’s cross is headed just over the crossbar by Aguero.

Half-Time: Attempt – SAVED – Liverpool: What a chance for Liverpool to deal a psychological blow just before half-time. Sterling should have put them in front! Coutinho spots Lallana’s timed run, who cues the ball for Sterling neatly with a backpass. But the 20-year-old takes his time and Kolarov prevents him from pulling the trigger. Sterling then sends a weak left-footed effort that is easily gathered by Hart.

45′: The deliveries from corners have been very very poor from Liverpool.

43′: Atetmpt – On-target – Liverpool: Coutinho fires one from 35 yards out but its straight at Hart and is easily gathered by the Man City shot-stopper.

35′: Attempt – Off-target – Liverpool: What a chance for Lallana to put Liverpool ahead once again. The Reds play a couple of passes and Markovic sets up Lallana with a beautiful chip but the 26-year-old puts his shot wide off the far post.

32′: Manchester City are retaining possession at the moment but are unable to create chances.

26′: GOAL – Manchester City: The visitors are level! Sergio Aguero unlocks a resilient Liverpool defence and plays Dzeko through. The Bosnian striker is played onside by Emre Can and he does the needful by bringing Man City back on level terms. Liverpool 1-1 Manchester City.

22′: Liverpool are causing serious problems for Manchester City defence. Sterling keeps his distance from Eliaquim Mangala inside the box and squares a tempting ball across the face of goal; only to find out he has no support.

13′: Attempt – Off the post – Manchester City: City look for an instant response but Sergio Aguero’s shot comes back off the upright. Liverpool cannot afford to switch-off here after such a splendid start.

11′: GOAL – Liverpool: LIVERPOOL have taken the lead and it’s Jordan Henderson. Coutinho nutmegs Vincent Kompany and steers ahead alongside Sterling, who finds Henderson marauding down the left. The 24-year-old then hodls the ball before taking his time and curling the ball past a full stretched Hart.

9′: Offside – Liverpool: Anfield erupts as Lallana pokes the ball past Hart from a seemingly impossible angle but the 26-year-old is offside.

8′: Attempt – On Target – Liverpool: Coutinho sets up Adam Lallana, who can only drive the ball into the hands of Joe Hart.

1′:  Liverpool get us underway and are attacking the Anfield Road end for the first-half.

Hello and welcome to the live score update of the Barclays Premier League 2014-15 match between last season’s runners-up and the champions. Liverpool welcome Manchester City to Anfield and last season’s corresponding fixture remain fresh in our minds. The Reds stormed into a 2-0 lead only to be pegged back by David Silva’s brilliance. But Philippe Coutinho conjured the winner to keep Merseyside club alive in the title race but then we all know how it panned out for both sides.

This time round, Liverpool are sitting fifth in the league table with 45 points from 26 matches while the Citizens are second with 55 points, just five behind league leaders Chelsea. Manuel Pellegrini will be hoping for his side to take back all three points from Merseyside as he hopes to seal Manchester City’s first win at Anfield since May 2003. Brendan Rodgers’ side are also on an unbeaten run of 10 matches and the Northern Irishman will be hoping for his side to maintain their splendid run of form against the Sky Blues.

The lineups are out and the most shocking update is that Steven Gerrard is not even in the matchday squad as he is reported to have not recovered from his hamstring injury. Rodgers has named three strikers on the bench in Daniel Sturridge, Mario Balotelli and Fabio Borini while Pellegrini has gone for the same starting lineup that beat Newcastle United 5-0 last weekend.