Uruguay will be without ace striker Luis Suarez during their upcoming friendly against Chile. Suarez, who only recently rejoined the team after serving a four-month ban from all football-related activity. 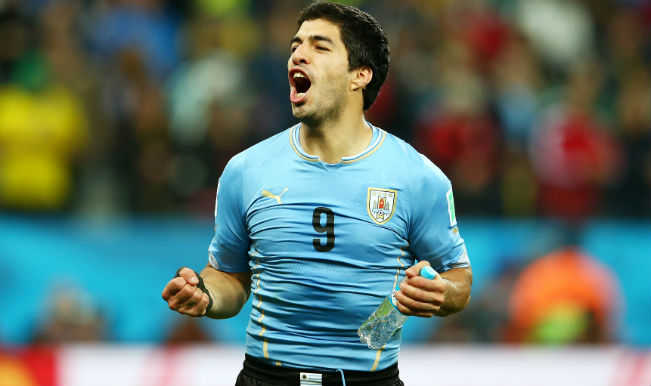 Montevideo, Nov 18 Uruguay will be without ace striker Luis Suarez during their upcoming friendly against Chile. Suarez, who only recently rejoined the team after serving a four-month ban from all football-related activity, returned to Spain, where he plays for Barcelona, reports Xinhua. For Tuesday’s game in Chile, national team coach Oscar Tabarez substituted Suarez with Diego Rolan, the Uruguayan Football Association (AUF) said in a press release. Also Read - Football Transfer: Luis Suarez Leaves Barcelona For Atletico Madrid

AUF took the decision to allow Tabarez to put other forwards to the test since Suarez is still barred from participating in eight competitive international games, as part of the penalties slapped on him for biting Italian defender Giorgio Chiellini during their match at the 2014 Brazil World Cup. “Taking into account (Suarez’s) inability to play with the national team in official matches, and after assessing the footballer’s game during the 90-minute match against Costa Rica (on Thursday), the coaching team decided he should return to Barcelona to rejoin his team,” the AUF said. Also Read - Lionel Messi Set to Lead Barcelona in Ronald Koeman's First Match as Coach; Luis Suarez, Vidal Miss Out

Suarez’s penalties, believed to be the most severe ever handed down by world football body FIFA, will sideline him from taking part in the 2015 Copa America, hosted by Chile. Uruguay’s game against Costa Rica ended in a 3-3 draw.