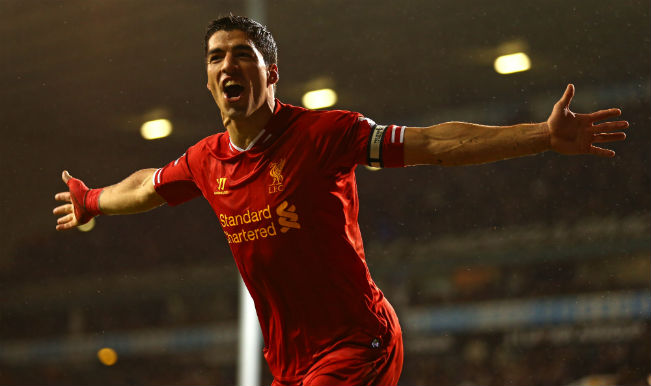 But now Suarez has been chosen by his fellow top-flight professionals in England as the outstanding player in the Premier League after spearheading Liverpool’s title bid.

Suarez received the award during a ceremony at London’s Grosvenor House hotel after flying down from Liverpool following a 2-0 defeat by Chelsea at Anfield that dented the Merseysiders’ challenge for a first English title in the Premier League era.

The 27-year-old Suarez has scored 30 league goals in 31 appearances, despite his ban for biting Ivanovic carrying over into the start of this season.

“The English Premier League is full of really great players and so it is a great honour when these players recognise your work on the pitch,” said Suarez, who threatened to leave Liverpool at one stage after claiming Reds manager Brendan Rodgers had gone back on a deal to let him move to a Champions League club.

However, Suarez added Sunday: “I always try my best for the team and it is nice to get awards but really this is for my team-mates and the staff at Liverpool because without their help I wouldn’t have this prize.”

Chelsea’s Eden Hazard, who didn’t play at Anfield due to injury, was named the PFA Young Player of the Year.

Suarez and Liverpool strike partner Daniel Sturridge were both included in the PFA Premier League team of the year, also chosen by their fellow top-flight professionals in England.

The duo were joined by Liverpool and England captain Steven Gerrard in the XI.

Chelsea also had three players in the PFA side in goalkeeper Petr Cech, defender Gary Cahill and Hazard.

Title-chasers Manchester City were represented by Vincent Kompany and Yaya Toure while the Southampton duo of Luke Shaw and Adam Lallana were also included, with Everton right-back Seamus Coleman in the XI.

However, no players from soon to be dethroned champions Manchester United or Arsenal were in the select side.