Carlsen scored 6.5 points first to retain the title that he wrested from Anand last year. 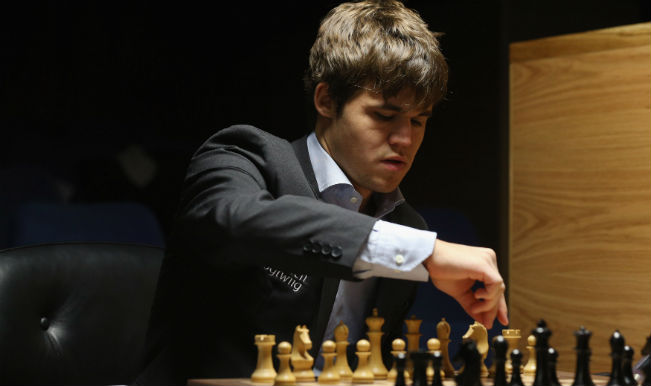 Chennai, Nov 23 World chess champion, Norway’s Magnus Carlsen retained his title, defeating Indian challenger Viswanathan Anand in the 11th round of their title match at Russia on Sunday. The reigning world champion called off the exchange sacrifice blunder or bluff of Anand on move 24 and wrapped up the 12 game in 45 moves. Also Read - Legends of Chess: Viswanathan Anand Suffers Eighth Defeat to End Disastrous Campaign

The reigning world champion called off the exchange/sacrifice blunder or bluff of Anand on move 24 and wrapped up the 12 game in 45 moves. Interestingly Anand went for the misadventure of exchange/sacrifice – giving up his rook for Carlsen’s bishop when he was enjoying a slight positional advantage. Also Read - Legends of Chess: Viswanathan Anand Loses to Ding Liren, Slumps to Seventh Defeat

Carlsen scored 6.5 points first to retain the title that he wrested from Anand last year. As predicted earlier Anand played it safe in the initial phase of the game as he was trailing a point behind Carlsen. Playing white, Carlsen opened by pushing his king pawn two squares forward. The game soon transposed into Ruy Lopez-Berlin defence.

And as it happened in the earlier games, Carlsen went in for exchange of queens. On move 9, Anand moved his white bishop to d7 square which was considered as a fighting move. Both the players blitzed their moves consuming around five minutes for the first 12 moves.

“Again Berlin defence-third time by Anand. It is unclear whether they played the prepared moves. Seems Carlsen did not expect Berlin defence,” World number 26 and Indian Grandmaster P.Harikrishna said. At the end of 13th move, Carlsen’s minor pieces were ready to come into play but the same could not be said so for Anand as his rooks and black bishop were rooted to their original squares.

“The Berlin defence is like that. Initially black pieces would seem to be inactive but they play an active role in a passive manner,” Harikrishna said. Two moves later, Anand opened up his king side by pushing his g file pawn two squares. Carlsen had castled on the king side.

The game taxied along with Carlsen moving his knight to control space as well as constrict Anand’s pieces to the back rank. On move 23, Anand offered a pawn sacrifice playing b5. However Carlsen declined the sacrifice to avoid any complications.

Computer engines showed Anand could end up with a passed pawn on the c file. On move 24, Anand went for exchange sacrifice giving up his rook for Carlsen’s black bishop. But the game plan backfired as Anand did not have sufficient counter play. All Carlsen had to do was to bide his time.

“It was a bluff,” termed Harikrishna about Anand’s exchange sacrifice. In move 31, Carlsen simplified his position by going in for knight exchange. And the end for Anand came soon.