Kieran Gibbs opened the scoring with an own goal before Rooney netted the winner. 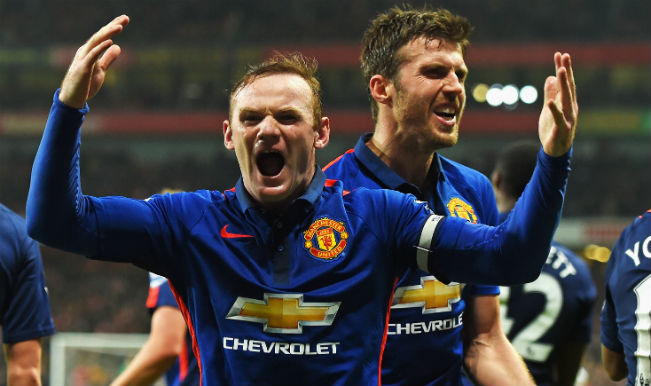 “Over-passing” —  A word with which Arsenal have been accused of over the years came back to haunt them yet again as Manchester United continued their dominance over their old rivals. Despite holding the ball for long intervals in the game, The Gunners failed to create any chances and the 20-time champions brutally cashed in on the hosts’ soft centre and notched up a 2-1 win. Also Read - Tottenham Hotspur Crush 10-Man Manchester United 6-1 to Inflict Joint-Worst Defeat at Old Trafford

The win put United in the top four and Arsenal have now slumped to eighth in the table. Arsenal were dominant in the first half and had the United defence on all fours throughout with a wave of attacks. Jack Wilshire and Aaron Ramsey were in the thick of it all through the centre and Alex Oxdale-Chamberlain and Alexis Sanchez terrorised the United with their mazy runs. Also Read - UEFA Champions League Draw: It's Messi vs Ronaldo Once Again as Barcelona Gets Drawn With Juventus in Group G

David De Gea stood firm and thwarted everything that Arsenal could throw at the Spaniard. A goal looked inevitable and United were on the backfoot. United opened the scoring under fortuitous circumstances.

Arsenal’s verve was already disrupted with Wilshire’s injury, minutes before the first goal. The midfield general was terrific until then and should have put the ball into the net when he found himself one-on-one with De Gea.

Ashley Young, who replaced the injured Luke Shaw, delivered a threatening ball into the box and Wojciech Szczesny punched the ball clear. Antonio Valencia latched on the ball that was running free and hammered a shot into the box and it took a big deflection off Kieran Gibbs, who was on the ground with alongside his goalkeeper.

Szczesny was stretched off after the goal and Emiliano Martinez made his first Premier League appearance. Arsenal kept attacking but the 3-5-2 formation that United had looked all at sea to adapt looked compact and Maraoune Fellaini was simply an imposing figure in the middle of the park. The Belgian had wound up Wilshire in the first half and he was wearing his opponents down in the second and was the Red Devils’ best outfield player by a distance.

Arsenal were getting desperate for the equaliser and had committed too many men forward and a swift counterattack, which had just three moves; Fellaini to Angel Di Maria to skipper Wayne Rooney killed the tie.

Rooney ran clear and saw the onrushing goalkeeper and produced a top-drawer chip; a nonchalance that is not spoken in the same breath as the United skipper’s power and heart. As the home crowd made their way towards the exit, Olivier Giroud, making a comeback pulled one back through a majestic strike off his favourite left foot. Despite eight minutes of stoppage time being awarded, Arsenal simply could not come up with the goods to beat United and Arsene Wenger saying in the post match conference that he was “speechless” totally summed up the agony and frustration at the Emirates. As for Wenger, the ghost of Sir Alex Ferguson’s marauding team in the Scot’s final years as manager continues to loom, and the result? More doom.