United had 62 percent possession in the first half but it rarely translated into anything meaningful. 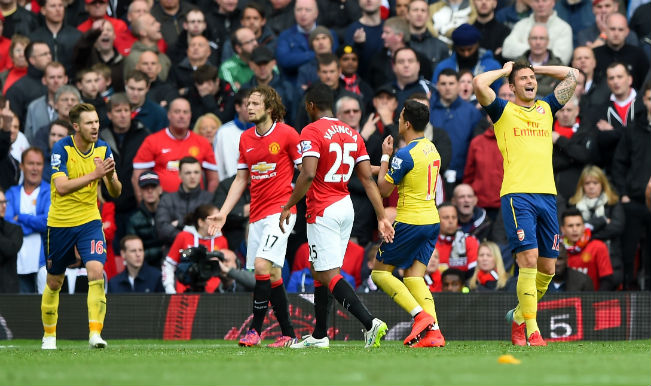 Despite being the second best team for large parts of the game and going behind through a quality strike from Ander Herrera, Arsenal managed to steal a point at Manchester United through an own goal in the Barclays Premier League. Elsewhere in the world, Paris Saint-Germain and Barcelona had clinched the league titles. The rival title rivals at the turn of the century were now battling it out for the 3rd spot with Chelsea romping away to the title and Manchester City more or less sealing the second spot. Also Read - Cristiano Ronaldo Transfer Rumour: Juventus Star Heavily Linked With Manchester United After Following Former Club on Instagram

United had 62 percent possession in the first half but it rarely translated into anything meaningful. It was the resurgent Ashley Young who set up the goal. Showing impressive quality on the left wing, the winger drifted a cross into the back post. With Arsenal’s backline preoccupied in covering Maroune Fellaini, Herrera was free and smashed the ball into the net. Also Read - David Beckham's MLS Franchise Inter Miami Appoint Phil Neville as New Manager

Arsenal had an improved showing in the second half and United ‘keeper David De Gea’s was forced off due to a hamstrung injury. Just when time was running out, defender Tyler Blackett got a wicked deflection from a Theo Walcott shot and the ball rolled past the hapless Victor Valdes. It could have been the last time that the Old Trafford faithful saw De Gea in a United jersey.