Manchester United returns to India with its hugely popular fan event, #ILOVEUNITED which will be attended by Club legends Dwight Yorke & Louis Saha

Manchester United announced it will be returning to India with its hugely popular fan event, #ILOVEUNITED. The event will be hosted in Delhi on Sunday 15th March, including a live match screening of Tottenham Hotspur vs Manchester United. Also Read - Chelsea vs Man United: Premier League Giants Play Out Two Goalless Draws in a Single Season For First Time in 99 Years

Club legends Dwight Yorke and Louis Saha will be in attendance, meeting fans throughout the day and offering their expert insight into the game with pre and post-match analysis. Also Read - Chelsea vs Manchester United Live Streaming Premier League in India: When And Where to Watch CHE vs MAN UTD Live Football Match Online And on TV

Fans in Delhi will also be able to enjoy a full day of activities before the live screening event, at the #ILOVEUNITED fanzone at Amphitheatre DLF Cyber Hub, Basement Street Number 1 BMS Office, DLF Phase 2, Gurugram, Haryana 122002, India. The fanzone is open from 10.00am to Midnight and fans can expect entertainment, giveaways and competitions courtesy of the club’s official partners. The #ILOVEUNITED fanzone is open to all fans and guests will not require a ticket to attend. Also Read - Europa League: Arsenal Come Back From a Goal Down to Beat Benfica 3-2; Man United Also Progress Ahead 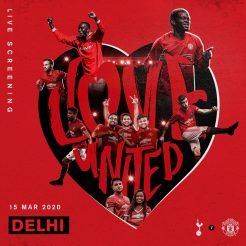 From 8pm onwards, Manchester United vs Tottenham Hotspur will be screened at the #ILOVEUNITED India live match screening. At the screening, Dwight and Louis will be joined by MUTV’s Mark Sullivan who will be hosting the pre and post-match show

The #ILOVEUNITED India live match screening is free to attend and fans can apply online for tickets by visiting www.manutd.com/ILoveUnitedIndia by no later than Sunday 8th March 2020. Applications will then be entered into a ballot, with tickets issued at random. Successful applicants will be notified by email no later than Wednesday 11th March 2020.*

Manchester United’s Director of Partnerships, Sean Jefferson commented: “Football is becoming increasing popular in India and the country boasts the club’s second highest fan base. We have recently announced that our academy team will be visiting in the summer for a cultural tour of Mumbai and we have hosted #ILOVEUNITED in India on five previous occasions. Over 50,000 fans applied for tickets collectively across these events, and we envisage our return to Delhi to be just as popular.

“#ILOVEUNITED has connected millions of Manchester United fans over the last five years, engaging with our fans on a global scale across visits to 19 cities around the world.”