Find out where to watch FA Cup quarterfinal clash between Arsenal and Manchester United here. 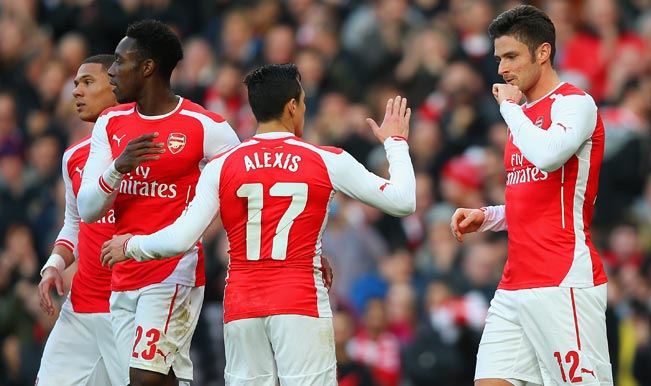 Defending champions Arsenal take on Manchester United in the quarterfinal of the FA Cup 2014-15 on Monday night. The kick-off is set for 1:15 am IST (7:45 pm GMT) and live telecast in India will be on Star Sports 4 and Star Sports HD 4. Viewers in UK can watch the match on BBC One while US Viewers can watch it on Fox Sports 1. Click here for the live streaming from Star Sports’ official website. Click here for additional live streaming services. Also Read - Cristiano Ronaldo Transfer Rumour: Juventus Star Heavily Linked With Manchester United After Following Former Club on Instagram

Manchester United last lifted this trophy 11 years ago and Louis Van Gaal will be eager to guide his side to bag a silverware in his first season incharge. They come into this having played away matches at Yeovil Town, Cambridge United and Preston North End. However, Cambridge forced a replay in the fourth round where the Old Trafford outfit emerged 3-0 victorious courtesy of goals from Juan Mata, Marcos Rojo and James Wilson. They did suffer a small scare against Preston as Scott Laird put Simon Grayson’s side ahead at the Deepdale Stadium. However, goals from Ander Herrera, Marouane Fellaini and Wayne Rooney scored to put Man Utd’s place in the quarterfinal. Also Read - David Beckham's MLS Franchise Inter Miami Appoint Phil Neville as New Manager

Meanwhile, Arsenal had an away trip against Brighton & Hove Albion sandwiched between third and fourth round clashes against Hull City and Middlesbrough respectively at the Emirates. Olivier Giroud’s brace proved enough for the Gunners in the previous round against the side that valiantly sent Manchester City packing in the fourth round in January.

Arsene Wenger’s side have rarely managed to win against the Red Devils with just six wins in 31 meetings in all competitions. The Gunners boast a poor record at Old Trafford, having just won once since the 2-0 victory in the FA Cup fifth round tie back in February 2003. The two teams clashed in this competition back in 2010-11 season where the team managed by Alex Ferguson won 2-0. Both teams have won the FA Cup 11 times and an intense tie awaits us as both teams look to go on to lift the trophy for a record 12th time.