Find out how to watch Manchester United vs Arsenal live online. 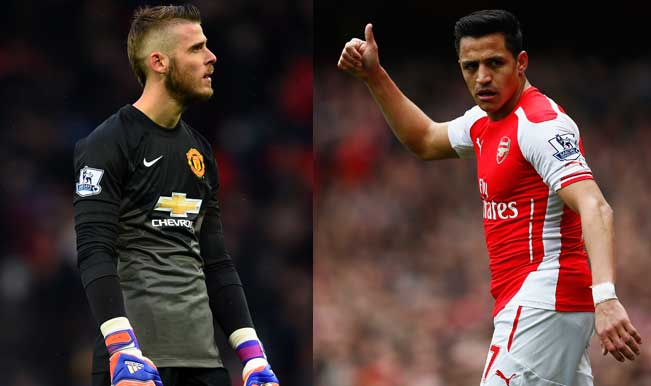 Manchester United welcome Arsenal to Old Trafford for their weekend fixture in the Barclays Premier League 2014-15 on Sunday. The kick-off is scheduled for 8:30 pm IST (4:30 pm BST) and live telecast will be on Star Sports 4 and Star Sports HD 4. You can watch the match online through the live streaming services provided by Star Sports’ official website. UK viewers can watch the match online on Sky Sports 1 and Sky Sports 1 HD while US viewers can tune in to NBCSN to watch the match live. Sky Go and NBC Sports Live Extra will provide the live streaming services for UK and US viewers respectively. Also Read - Cristiano Ronaldo Transfer Rumour: Juventus Star Heavily Linked With Manchester United After Following Former Club on Instagram

With a guaranteed place in the Champions League up for grabs, Arsenal look to seal a third place finish. They have played one game less than the Red Devils and have matches against Sunderland and West Bromwich Albion before their campaign concludes. Also Read - David Beckham's MLS Franchise Inter Miami Appoint Phil Neville as New Manager

The Gunners come into this fixture following a surprise 1-0 defeat against Swansea City at the Emirates last Monday. Goal line technology played a decisive role in helping the referee make a decision as Bafetimbi Gomis’ header managed to get over the line as David Ospina haplessly parried the ball away. The north London club suffered their first defeat in the league since the 2-1 reversal against Tottenham Hotspur at White Hart Lane back in February.

Revenge will undoubtedly on the minds of Arsene Wenger’s side as it was Manchester United who inflicted their last home defeat in November. Arsenal can also take motivation from the fact that they managed to beat Louis van Gaal’s side in March at Old Trafford in the FA Cup quarterfinal tie.

The 20-time English champions come into this fixture after breaking their three-match losing streak by beating Crystal Palace 2-1. With a game against relegation strugglers Hull City looming, Van Gaal will be hoping that his side do not suffer back to back defeats at home under his tutelage and hope to clinch the third place; which will guarantee his side a direct place in the Champions League.