Skipper Wayne Rooney, Chris Smalling and Robin van Persie got on the scoresheet for United. 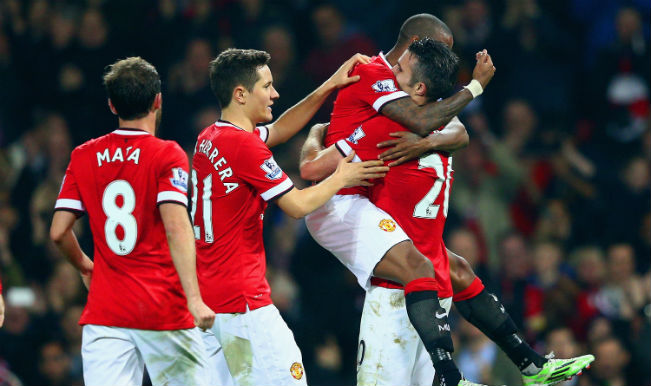 Manchester United put on a spiffy piece of performance to win their third game on the bounce to consolidate their position in the top four with a runaway win at Old Trafford, slotting three past Hull City. More than the win, the entire team was in sync with each other and displayed the kind of football that was a throwback to the glory days, where wins such as these was normal service. Also Read - Tottenham Hotspur Crush 10-Man Manchester United 6-1 to Inflict Joint-Worst Defeat at Old Trafford

While the football was sumptuous, the evening ended on a sour note with Angel Di Maria limping off, pulling his hamstring and sending a few jitters across the capacity crowd. Sticking to the United of the old, an early goal was such a common feature in the days where they romped to silverware and it was Chris Smalling who opened the scoring. In a scrappy mud-fight in the penalty area, where the gargantuan Marouane Fellaini was a menace, Smalling had the last touch to put United in the lead. Also Read - UEFA Champions League Draw: It's Messi vs Ronaldo Once Again as Barcelona Gets Drawn With Juventus in Group G

It was smooth sailing for the Reds from there on and Wayne Rooney doubled the lead with a cool finish with a shot from outside the box. Robin van Persie combined well with the skipper to chest the ball back for Rooney to pick up the ball, find space and slot his second goal in as many games. Van Persie, then found his scoring boots with a well taken finish in the second half to bring back the smiles at the Stretford end.