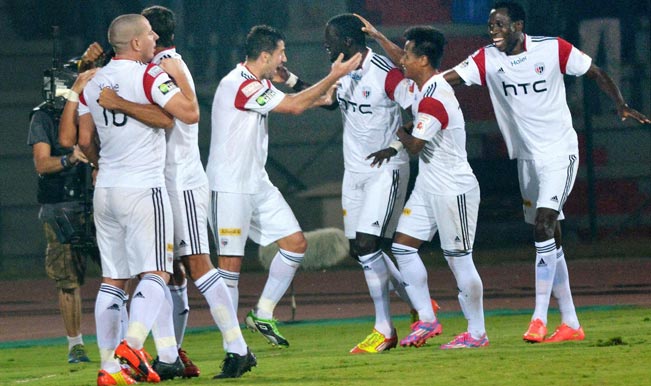 Guwahati, Nov 27: NorthEast United FC pumped in three first half goals in a rampaging show to drub table toppers Chennaiyin FC 3-0 in an enticing Indian Super League (ISL) 2014 match to keep their hopes of a semifinal berth alive. Senegalese defender Massamba Lo Sambou scored twice in the space of two minutes after Durga Boro struck in the 10th minute to consolidate his status as one of the domestic finds of the tournament in front of a packed crowd at the Indira Gandhi Stadium. Also Read - East Bengal Head Coach Robbie Fowler Promises to Treat Each Player Equally

With nearly 30,000 home supporters cheering their club, the Highlanders raced ahead 3-0 within 23rd minutes and they denied the league leaders from Chennai to score any goal to notch up their first win in seven matches. Marco Materazzi’s side did most of the attacking with more shots on goal but they could not find the target. Even NorthEast marquee player Joan Capdevila’s sending off in the 72nd minute after his second yellow card did not lead to any goal from the visitors. Also Read - ISL 2020-21: Jamshedpur FC Sign Seasoned Goalkeeper TP Rehenesh

NorthEast were on the ball right from the word go. They pegged the visitors back in their own half with their passing and speed of movement, particularly down the flanks. The home fans did not have to wait long to see their team go in front, when Eric Djemba-Djemba’s headed clearance hit Seiminlen Doungel and fell kindly for Durga Boro in the 10th minute. The Assamese striker was in the right place at the right time and pounced on the opportunity and finished past a charging Gennaro Bracigliano.

That opened the floodgates and 11 minutes later Sambou got two goals in quick succession, both from set pieces, one a corner, and the other a free kick. The latter a beautifully floated curler from Koke which saw the Senegalese defender rise majestically over his markers and head the ball powerfully across the goal and into the far corner of the net.

Both goals came in a space of two minutes and NorthEast were three goals ahead in the 23rd minute after managing to score just one goal in the last three games.  The match had a lot of heated moments as the visitors felt the pressure getting to them, but surprisingly, they were the team that ended the game with 11 men, as NorthEast marquee player Capdevila was sent off in the 72nd minute after his second booking.

Before today’s victory, NEUFC had not won a match since their 2-0 away win over Mumbai City over a month ago on October 24. Since then, they have lost three and drawn three matches before today’s win. The result against Chennaiyin FC helped Ricki Herbert’s side jump to fifth spot with 13 points from 11 matches while the team co-owned by MS Dhoni and Abhishek Bachchan remained on top of league table with 19 points from 11 matches.

Chennaiyin FC will now feel the pressure what with Atletico de Kolkata hot on their heels with 16 points from 10 matches. They now head to Kochi for the South Indian derby against Kerala Blasters FC on November 30 while NorthEast take on FC Goa for their next fixture on December 1.