Michael Clarke to be pallbearer of Phillip Hughes’ coffin

Australia skipper Michael Clarke will be one of the pallbearers and will lead tributes at the funeral of his close friend Phillip Hughes on Wednesday, Cricket Australia announced. 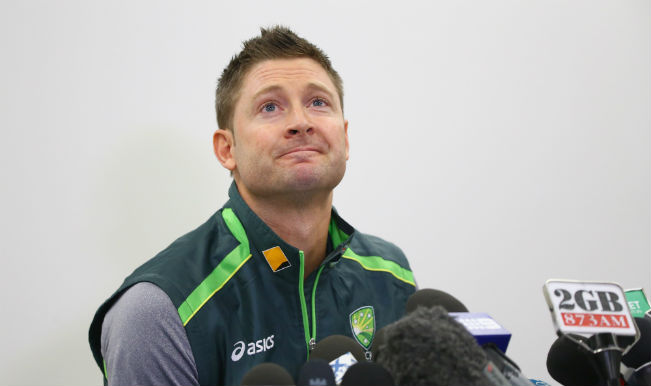 Sydney: Australia skipper Michael Clarke will be one of the pallbearers and will lead tributes at the funeral of his close friend Phillip Hughes on Wednesday, Cricket Australia announced. As the funeral details were revealed Tuesday, chief executive James Sutherland said it was too early to say which players would be mentally ready to face the hastily rescheduled Tests against India. Also Read - Who Should be Australia Test Captain After Tim Paine? Michael Clarke Picks Pat Cummins

The opening clash between the teams was due to start on Thursday at the Gabba in Brisbane but was put off following Hughes death last week, with many fellow players left emotionally shattered. Also Read - Michael Clarke Says 'India Can Celebrate For a Year if They Can Beat Australia Without Virat Kohli'

The funeral in Hughes’ hometown of Macksville on Wednesday will be attended by the Australian Test squad as well as past and present luminaries of the game including Mark Taylor, Sir Richard Hadlee, Brian Lara, Virat Kohli, Ravi Shastri, Shane Warne, Mike Hussey, Ricky Ponting, Brett Lee, Adam Gilchrist and Glenn McGrath.

Prime Minister Tony Abbott is also due to attend the service at which Clarke, who was by Hughes’ bedside as he lay stricken in a Sydney hospital, will speak in tribute and join family members and fellow Australia batsman Aaron Finch as a pallbearers. Hughes died last Thursday from bleeding on the brain, two days after being knocked unconscious by a bouncer in Sydney, throwing the cricketing world into mourning.

Given the funeral on Wednesday, Cricket Australia late Monday amended the Test dates after lengthy talks with the Board of Control for Cricket in India and other stakeholders. Instead of starting on Friday, December 12 — as the second Adelaide Test was originally scheduled — it will now begin on December 9 and be the opening match of the series.

“There is nothing perfect about what we have come up with here but we appreciate everyone’s support and understanding in these tragic and extraordinary circumstances,” Sutherland said. The second Test will be played in Brisbane from December 17-21 with the traditional Boxing Day clash in Melbourne remaining unchanged, while the Sydney Test has been pushed back three days and will now start on January 6.

Whether the players will be ready for the Adelaide Test remains to be seen. David Warner, Shane Watson, Brad Haddin and Nathan Lyon were all on the field when Hughes was hit while captain Michael Clarke was a close friend and his emotions have been raw.

“Any player that is not comfortable or doesn’t feel right, or there is medical advice to suggest they’re not quite right, then we will obviously understand that,” Sutherland said. Veteran bowler Ryan Harris said he was not sure whether he would take the field in Adelaide. “I am still thinking about it — I’m not sure,” he told reporters of his availability, but he added that returning to cricket helped him when he lost his mother to lung cancer in 2006.

A two-day tour match has also been organised in Adelaide for India against a Cricket Australia XI. The game, starting Thursday, is meant to help the Indians prepare for the first Test. The tragedy has deeply shaken the world cricket community, particularly in Australia where the sport is considered the national game. Flags have been flown at half mast and bats left outside front doors as a mark of respect. Hughes died after his vertebral artery split when hit by the ball, leading to massive bleeding in his brain. It was a freak injury with only 100 cases ever reported and only one as a result of a cricket ball.