Michael Clarke’s journey from being ‘Pup’ to ‘Leader’ of the Australian Cricket Team!

From playing the role of ‘big brother’ to Hughes’ inconsolable family to offering support to young Sean Abbott who needs the maximum attention at this moment, Clarke has performed all his roles with perfection. 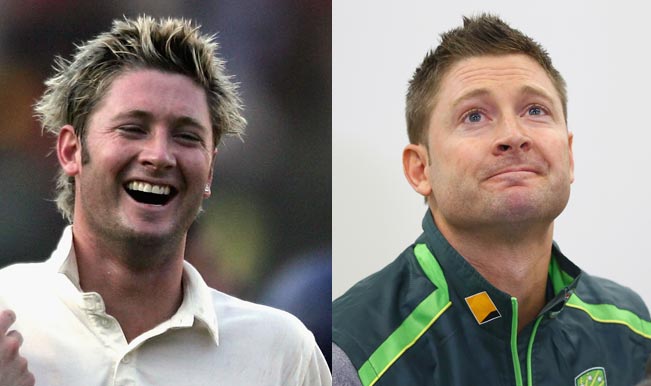 After watching an emotional Michael Clarke fight his tears back while reading the tribute to Phillip Hughes’, one could not help but think about the chirpy, enthusiastic, golden-haired Michael Clarke of nine years back, who was making his debut against India in 2004. A lot has changed between these nine years, apart from Clarke evolving from a carefree, boyish player to a responsible team-mate. But these dark times since Hughes’ death has redefined him as true leader; a leader who will fight the deadly storms and still stand rock-solid. In dignity and in respect, the ‘better man’ addressed the media and in tears read out the tribute. Also Read - IPL 2021 Auction: Australia, England Cricketers to be Available For Entire IPL Season - Report

What started with the freak accident involving Phillip Hughes’ injury at the Sydney Cricket Ground, will remain etched on the minds of everyone it touched upon. The sudden and untimely death of Australian Test cricketer Phillip Hughes on November 27th brought several aspects of life on surface. 25-year-old, Hughes’ death circled several individuals including the players who witnessed his journey of death from a cricket pitch to St. Vincent’s Hospital, Sydney. While Phil departed early, other youngster Sean Abbott, the New South Wales bowler is still recuperating from the guilt of ‘taking a life’ [Read: Not his fault]. Australian cricket looks in tatters at the moment with most players not in the right frame of mind. Michael Clarke, nonetheless, amidst all the battle of tears has shown great poise. Also Read - Australia Announce 19-Man Squad For South Africa Tests; Matthew Wade Dropped While Alex Carey Gets Maiden Call-up

For 33-year-old, New South Wales-born Michael Clarke, life has always been under the spotlight. He could owe a lot to his boyish good looks, batting style or famous personal life with model Lara Bingle in his earlier days. The blonde-haired player right from making a dream Test debut became an integral part of Australian national cricket side – but as a good player.

Clarke took the reins from twice World Cup winning captain, Ricky Ponting in 2011 to becoming a full-time Test as well as ODI captain. But captaincy did not come easy for ‘Pup’ who not only struggled with carrying Australia’s dominant history on field, but his ‘glamorous image’ off-field. One of the common threads Australia’s rule in cricketing world has been the presence of able, shrewd leaders with the likes of Allan Border, Mark Taylor, Steve Waugh and Ricky Ponting. But Clarke failed to gain confidence of his fans in the role of a leader. The lack of result and constant chopping and changing of the squad led to Clarke’s ability as a leader coming under question. Compared to Ponting, Clarke’s aggression has come under scanner as the latter has failed to deliver good results.

In the horrific death of his team-mate Phillip Hughes, Michael Clarke redefined the true meaning of being a leader. He showed a leader could be somebody who may not show physical aggression but someone with steely nerves and able shoulders to pull the team out of something as horrific as death. Since the first minute of this terrible incident, Clarke has been ensuring to keep everyone together in this moment of crisis. He penned down a beautiful, emotional tribute for Hughes on his 26th birthday to extending support to Sean Abott, the bowler who delivered the brutal bouncer that eventually killed Hughes.

Clarke’s word for Sean Abbott would increase his respect in your eyes even more, he said “”I would like to say some words about Sean Abbott. This is a tremendous young man with a bright future whose life has changed forever by this accident. And that’s what it is a freak accident. “No-one, not one single person, blames him in any way for what has happened. He deserves our full support, he will absolutely have mine whenever he needs it, and I know that also goes for the entire Australian cricket community. Sean, when you feel like getting back on the horse mate, I promise you that I will be the first to strap on the pads and go stand up the end of the net to hit them back at you. It’s exactly what Hugh Dog would want us both to do.”

From playing the role of ‘big brother’ to Hughes’ inconsolable family to offering support to young Sean Abbott who needs the maximum attention at this moment, Clarke has performed all his roles with perfection.

One definitely cannot forget the dominance of Australia in the history of cricket that started with Steve Waugh’s Invincibles in 1999 World Cup to supremacy continued till Ricky Ponting’s World Cup winning side in 2007. There has been slump in Australia’s dominance in cricketing terms, but he has proved solidly and honourably, that he is indeed the right man to lead a bunch of boys in Australian cricket’s transition phase.