Andre Santos chipped in a man of the match performance once again as FC Goa continued their surge in the top half of the Indian Super League table. 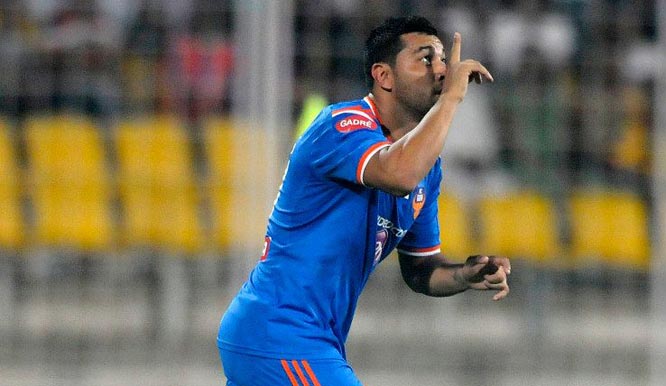 FC Goa brought and end to Kerala Blasters FC‘s five-match unbeaten run in the Indian Super League (ISL) 2014 by registering a convincing 3-0 victory at the Jawaharlal Nehru Stadium in Fatorda on Wednesday. Miroslav Slepicka scored two (taking his tally to three) on either side of Andre Santos’ strike to help the home side register back-to-back victories for the first time this season. The result helped Zico’s side leapfrog the visitors and clinch the third place in the league table. Also Read - ISL 2019-20: Mumbai City FC Sign Adam le Fondre on Season-Long Loan

Zico sent out an unchanged side that beat FC Pune City 2-0 last Saturday and nearly took  the lead in the 8th minute. Tolgay Ozbey raced through on goal but his shot was deflected onto the upright by Sandesh Jhingan’s tackle. The rebound fell to Andre Santos, who was seeking his second goal of the season, but David James was on hand to deny the Brazilian. The corner once again forced the former England international as Zohib Islam Amiri’s glancing header was tipped over the crossbar. Also Read - East Bengal Head Coach Robbie Fowler Promises to Treat Each Player Equally

The Blasters looked to react immediately with Andrew Barisic but his shot was not powerful enough to beat Jan Seda in Goan goal. Raphael Romey and Godwin Franco got themselves booked for some silly challenges with the South Korean’s tackle forcing Ozbey to be replaced by Slepicka. FC Goa had some brilliant opportunities o the cusp of half-time but James’ experience coupled with some excellent defending from Gurwinder Singh kept the score goalless at the break.

The KBFC’s player-coach denied Mandar Rao Desai with his flailing leg in the 43rd minute but just two minutes later cost a goal. The 44-year-old spilled a cross and the ball rolled outside the box to Santos, who saw the opportunity to break the deadlock. But Gurwinder saved James’ blushes by denying the former Arsenal defender and heading the ball away just ahead of the goalline.

The visitors brought on Iain Hume and Milagres Gonsalves for Romey and Franco, to prevent a risk of getting them sent off in the second-half. The substitutes combined immediately and nearly set up Barisic, who failed to connect his shot properly.

The goal finally arrived in the 64th minute when Jhingan conceded a foul outside the box. Santos delivered the free-kick and Slepicka was on hand unmarked at the far post to tap home the opener. Five minutes later, the Brazilian got his second goal of the season, after receiving the ball from Bikramjit Singh and slotting it past James.

10 minutes later the third and final goal of the game arrived. Slepicka exchanged passes with Bikramjit and raced through on goal. The Czech Republican’s strike was parried away by James only to a short distance as but the striker continued his run and slotted home to take his tally to three for the season.

The result meant the Blasters and FC Goa exchanged places in the points table. Zico’s side now face NorthEast United FC on December 1 while the team co-owned by Sachin Tendulkar will play the South Indian derby against Chennaiyin FC on November 30.