India vs New Zealand: India pacer Mohammed Shami seems to have got himself in the middle of another controversy.

India vs New Zealand: India pacer Mohammed Shami seems to have got himself in the middle of another controversy. After his wife Hasin Jahan accused him of chatting with random women on Tik-Tok, another unknown lady has come up with an incident where Shami apparently messaged her.  She did not know who the cricketer was and hence she wanted to find out, that is exactly what her post indicated. The Instagram user named Sophia wrote, “anyone wanna tell me why some random cricket player with 1.4m followers keep messaging me.” The screenshot surfaced on social space and since then has gone viral. Also Read - Twitter Announces New Feature That Would Let Users Charge Followers, Netizens React

Here is the screenshot: Also Read - 'I Love You Baby'! Shahid Kapoor's Wife Mira Kapoor Showers Love And Kisses on His Birthday 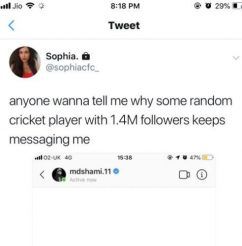 Meanwhile, Shami is expected to play a massive role in the match against New Zealand. Shami was rested against Sri Lanka in the last group match so he is expected to be fresh which augurs well for the team. During the match, Shami should put all of this behind him and focus on the tie.

It will not be an easy task and the team in blue certainly remember what happened the last time both the teams faced. The Kiwis had comfortably beaten India in one of the warm-up games, leading to the ongoing World Cup.

New Zealand, on the other hand, have slightly deviated from their winning momentum and suffered three consecutive losses in their last three league games. One of the favourites in the initial stages of the tournament, the Kane Williamson-led side lost their track and went on to taste defeat at the hands of Australia, Pakistan and England. Owing to their unbeaten show during the first few games, they managed to maintain a substantial run-rate and sneak into the semifinals ahead of Pakistan. Beating India should be their toughest task till now in the tournament.