MS Dhoni-led Chennai Super Kings have finally reached UAE for the upcoming season of the Indian Premier League on Friday evening amid fanfare.

MS Dhoni-led Chennai Super Kings have finally reached UAE for the upcoming season of the Indian Premier League on Friday evening amid fanfare. The CSK side had left Chennai on Friday afternoon via Vistara. All eyes will be on the yellow brigade because of Dhoni – their skipper – who recently announced his international retirement from cricket on August 15. The CSK players are there along with Dhoni wearing masks amid the pandemic. Also Read - LIVE Rajasthan Royals vs Kings XI Punjab, IPL 2020 Match 9 Live Cricket Score And Updates: Cottrell Removes Buttler, KXIP Hurt Royals in 224 Chase 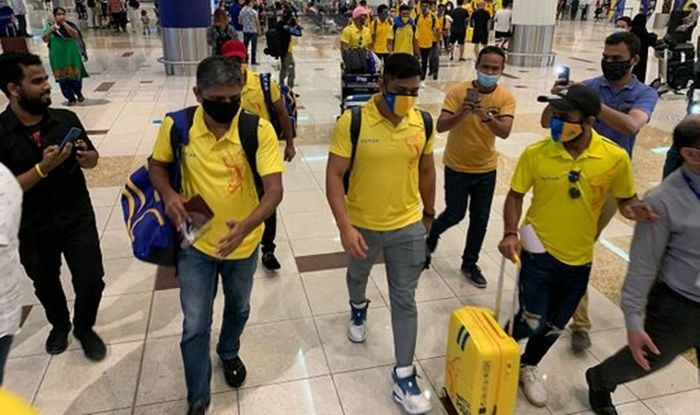 During the camp, the 39-year old former captain of India looked in top form as he smashed balls as he used to during his early days in the national team, before settling into the role of a finisher – as years passed.

The super camp sorely missed the super fans, thanks to COVID. But we managed to end it with a loud whistle! #WhistlePodu #Yellove 🦁💛 pic.twitter.com/z8NoMk7h6p

Once CSK land in UAE, they will have to undergo a bio-security bubble to ensure the safety of players amid the pandemic.

Sixty games will be played over 53 days across three venues — Dubai, Abu Dhabi, and Sharjah. In 2014, UAE had hosted the IPL partially due to the general elections in India. Fans will also not be allowed to come into the stadiums and will have to stream it or watch it on TV.

CSK is one of the most successful franchises in the league – winning the title three times. Only Mumbai Indians are ahead of them, with four titles.