Mahendra Singh Dhoni has resigned as India’s cricket captain. He was leading the Indian team in ODIs and T20 ever since he retired from Tests on December 30, 2014. Also Read - IPL 2020 Playoffs: Will Chennai Super Kings Make it to The Top-Four? Scott Styris Says No

Mahendra Singh Dhoni informed the BCCI that he wished to step down as the captain of the Indian cricket team from the limited-overs formats of the game, said a statement from the Board. The 35-year-old from Ranchi played 283 ODIs and 199 of them as captain. Also Read - IPL 2020, CSK vs MI Predicted Playing XIs, Fantasy Tips, Sharjah Pitch Report, Toss Timing, Full Squads And Weather Forecast For Match 41

Dhoni has seen an illustrious career as an ODI and T20 captain, leading the Indian Cricket team to win World Cups in both formats. It is unclear why Dhoni took the decision till now. BCCI said that Dhoni would still be available for selection as wicket keeper-batsman for the upcoming England series. 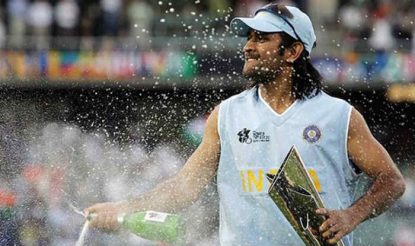 1) 2007 World Twenty20 in South Africa:
The final of 2007 ICC Twenty20 World Cup was played between India and Pakistan. It was one hell of a match as with one over remaining and one last wicket in hand, Pakistan needed just 13 runs to win, and it was captain MS Dhoni who took the risk and gave the final over to Joginder Sharma who was not so experienced bowler. Well, MS Dhoni proved his captaincy skills in the end as Joginder Sharma got the crucial wicket of Misbah-ul- Haq that was also the last wicket for Pakistan and India won their first T20 World Cup by defeating Pakistan by 5 runs. It also happened to be the inaugural T20 World Cup. 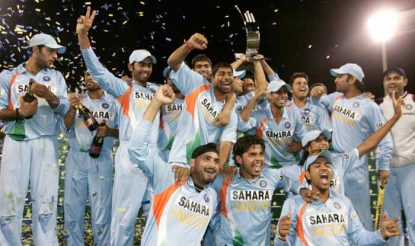 2) 2008 Commonwealth Bank Series:
India had never won a limited over series in Australia in their long history of touring down under, but all that changed under the leadership of MS Dhoni. In 2008, after an acrimonious Test series, which India lost, the onous was on the limited overs team to strike back. India beat Australia once and Sri Lanka twice in the round robin phase of the Commonwealth Bank series to scrape into the finals.

A Sachin Tendulkar special ensured India the first of the best of three final at Sydney and then a Praveen Kumar inspired bowling attack gave Dhoni’s men their first ever ODI series win in Australia. 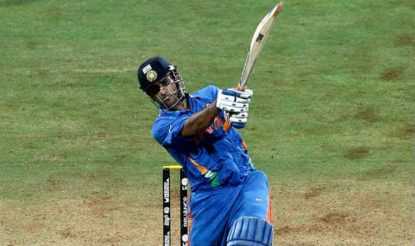 3) 2011 ICC World Cup:
Twenty-eight years on from the match that transformed the history of world cricket, India recaptured the crown that Kapil Dev and his men first lifted at Lord’s in 1983, and this time they did so in their very own back yard. An iron-willed 97 from Gautam Gambhir was matched for intensity by the finest captain’s innings since Ricky Ponting in Johannesburg eight years ago, as MS Dhoni trumped a poetic century from Mahela Jayawardene to pull off the highest run-chase ever achieved in a World Cup final.

Captain Dhoni played the innings, which in many ways will go on to define his career, as he soaked in all the pressure to score a match-winning unbeaten 91 of just 79 balls to take India to their second World Cup title.

Against a triumphant backdrop at the Wankhede Stadium, victory was sealed by six wickets with 10 balls to spare, as Dhoni – who had promoted himself to No. 5 to heap extra lashings of responsibility onto his own shoulders – rushed through the gears as the victory target drew nearer. With 15 required from 17 balls, he flicked Sri Lanka’s only true threat, Lasith Malinga, through midwicket for consecutive boundaries, before smoking Nuwan Kulasekara over long-on to finish on 91 not out from 79 balls and spark the most delirious scenes of celebration ever seen on the subcontinent. 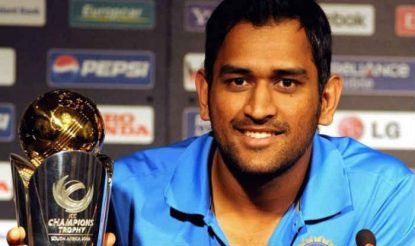 4) 2013 Champions Trophy:
India defeated England by five runs to lift the ICC Champions Trophy 2013. With that victory, Dhoni completed his set of ICC trophies and thus becoming the first captain to win all the major ICC championships. We witnessed the sight of MS Dhoni jumping triumphantly as James Tredwell failed to connect with the final ball of the match and that will be etched in the mind, just like his iconic six that helped India to the World Cup.

But even on that April evening in Mumbai, Dhoni had not celebrated in such an exhilarating fashion as he did as India won the Champions Trophy. Dhoni later explained why he let his guard down at the end of the match.

“This means a lot because we were playing one of the best sides and also the kind of match that we had won,” Dhoni said. “To beat England in a 130-odd game is very difficult,” said Dhoni.

Although India entered the final as the only unbeaten team, playing England on home soil against their quality fast bowling attack was a challenge that was altogether different. Add to that the pressure of playing a final of a world tournament. 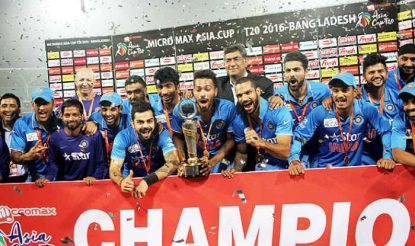 5)2016 Asia Cup T20:
This was the first time the Asia Cup was held in T20 format and India proved why they were the No.1 side in T20 Internationals. MS Dhoni’s men brushed aside all the challenge, including arch rivals Pakistan, to set up a Final clash with hosts Bangladesh and India won the 2016 Asia Cup T20 trophy for a record sixth time after beating Bangladesh by 8 wickets in the final.

After Dhawan got out, M.S. Dhoni, promoted himself up the order and finished the match in grand style. M.S. Dhoni scored 20 off just 6 balls with 1 four and two huge sixes and silenced the crowd at the Sher-e-Bangla stadium.

Also, Dhoni’s feat in the T20 World Cup 2007 and the backing of senior players such as Sachin Tendulkar helped him become the ODI skipper later that year, and Test skipper in 2008. It was under his captaincy that India topped the rankings in all the three formats. Under Dhoni, India were also the world No. 1 team in Test cricket, a feat which was achieved for the very first time in their history.

Here is the overall Dhoni’s record as captain: