It is a fan page that made that post which is absolutely fake.

So MS Dhoni is going to feature in the T20 World Cup to be held next year in Australia? Not really! An MS Dhoni fan page came up with a post with the blue tick official handle of Dhoni where apparently the former skipper has confirmed his participation in the tournament. The post garnered a lot of hits as fans got surprised as Dhoni keeps a very low profile and will never make a statement like this amid retirement rumours. Dhoni has just made himself unavailable for the next two months as he will serve his regiment. Which means, he will not travel to the Caribbean.Also Read - IPL 2022: CSK, Suresh Raina & An Unique Link To Missing Playoffs

It is a fan page that made that post which is absolutely fake. Here is the screenshot of it. Also Read - IPL 2022: MS Dhoni Fan Breaches Security During RR vs CSK; PICS Go VIRAL 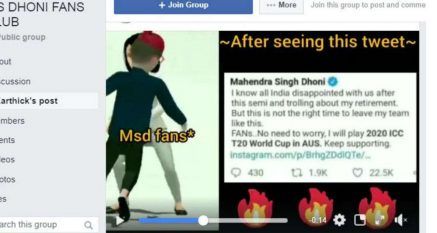 The reality is that Dhoni has not taken to Twitter since 2018. Dhoni is not a social person, instead, he prefers to keep his personal life under the wraps and that helps him to juggle between family and the game. Also Read - IPL 2023: Mukesh Choudhury to Matheesha Pathirana; 3 Uncapped Stars MS Dhoni-Led CSK May Retain

Earlier in the year, Dhoni-led CSK to the finals of the IPL and also bagged the Man of the Series in Australia in ODIs. In the World Cup, he held India;s hopes in the semi-finals where he hit a gritty 55, unfortunately only to end up on the losing side.