His successor in the classic whites, Virat Kohli has been given the responsibility to lead the side beginning from the fourth Test in Sydney. 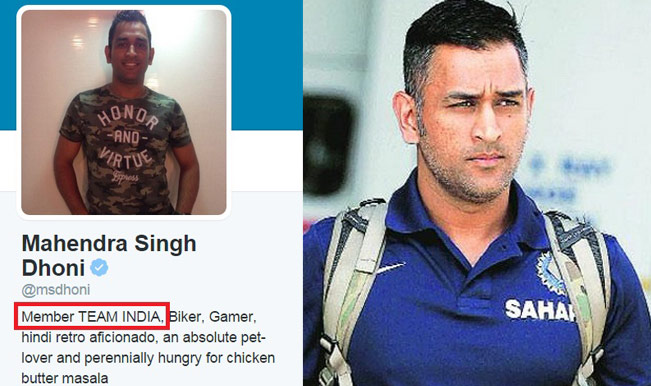 In present over hyped age of aggressive, fiery brand of cricket, MS Dhoni comes across as the breath of fresh of air. The former captain of Indian Test side never fails to showcase his humble side, time and again. Dhoni, who announced his retirement from the Test cricket after the third Test in Melbourne of the ongoing Commonwealth Bank Series, did something marvelous to win hearts of his fans once again. Also Read: MS Dhoni – Beyond the Man with Midas Touch lied a logic-defying tactician

MS Dhoni after announcing his retirement from the long form of cricket and passing on the baton to the next-in-line contender, Virat Kohli, made sure to update his Twitter Bio. Dhoni Official Twitter account has been updated from – Captain TEAM INDIA to Member TEAM INDIA. The complete bio now reads – Member TEAM INDIA, Biker, Gamer, hindi retro aficionado, an absolute pet-lover and perennially hungry for chicken butter masala. 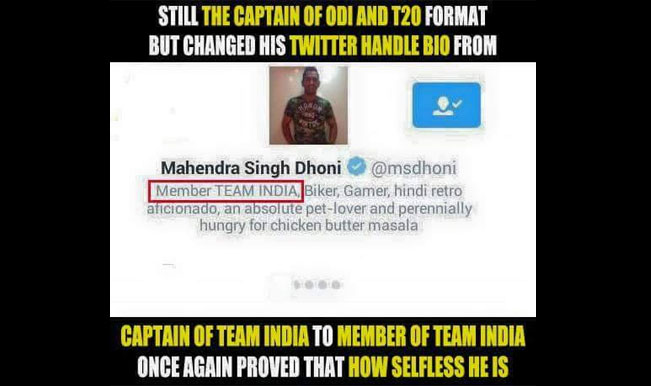 This lovely gesture of Dhoni has surely won many more hearts as his followers had great word for the 2011 World Cup winning captain on the social media platform. The ardent fans of MS Dhoni posted the picture of their beloved captain in order to appreciate his act of selflessness. You can read the brilliant comments, appreciating Dhoni.

Dhoni’s sudden decision to bid goodbye to the Test cricket drew massive reactions, both positive and negative. His successor in the classic whites, Virat Kohli has been given the responsibility to lead the side beginning from the fourth Test in Sydney. As for Dhoni, he will now focus on One Day Internationals and Twenty20s, especially on the upcoming ICC Cricket World Cup 2015, with India playing to retain the title.