Dhoni shared an Insta post which features a picture collage of his daughter Ziva and Bollywood star Ranveer Singh wearing the same pair of sunglasses.

Enjoying his time away from the gruelling international routine, MS Dhoni is making the best possible use of his free time by spending some quality moments with his family. Dhoni, who has been missing out from action since India’s exit in the semifinal of ICC World Cup 2019, shared a picture collage of his daughter Ziva and actor Ranveer Singh on his official Instagram account on Monday. In the picture, Dhoni compared the style quotient of the 4-year-old Ziva with the Bollywood star.Also Read - Ranveer Singh's Music Label IncInk Records to Make Music For Hearing Impaired

The 38-year-old captioned the picture, “Ziva was like why is he wearing my glasses then she goes upstairs to find hers and finally says my glasses r with me only. kids r different these days. at four and a half I won’t have even registered that I have similar sunglasses. next time she meets Ranveer I am sure she will say I have the same glasses as urs”. Also Read - Anushka Sharma Leaves Fans in Splits as She Roasts Ranveer Singh at Elle Beauty Awards 2019

Ziva was like why is he wearing my glasses then she goes upstairs to find hers and finally says my glasses r with me only.kids r different these days.at four and a half I won’t have even registered that I have similar sunglasses.next time she meets Ranveer I am sure she will say I have the same glasses as urs

Dhoni explained in the post that his daughter Ziva came across Ranveer’s picture and found out that the Bollywood star was wearing similar sunglasses as hers. After realising this, the little one rushed to check her own pair of glasses and felt relieved after she found them in her cupboard. Also Read - Ziva Dhoni Pouts And Makes Adorable Faces as She Debuts at ICC World Cup, Pictures Are Too Cute to Handle

On the work front, Dhoni had made himself unavailable for the India tour of the West Indies and ongoing South Africa series as he decided to take a two-month sabbatical from cricket. During the period, the former India skipper served in Indian Army’s territorial unit in Kashmir. 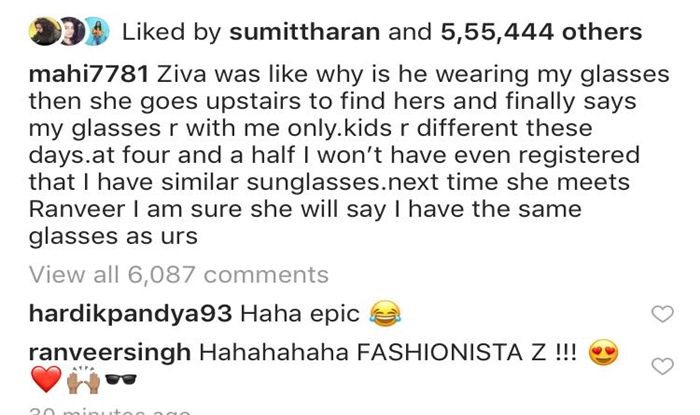 Recently, Dhoni was caught in action in the football field as he played a charity match along with tennis star Leander Paes and Bollywood actor Arjun Kapoor in Mumbai. Earlier, he was pictured enjoying a game of billiards at the JSCA International Stadium Complex in his hometown of Ranchi.

Before that, the 2011 World Cup-winning captain’s pictures of driving his newly-bought Jeep Grand Cherokee Trackhawk had also gone viral.